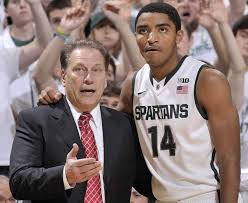 Tom Izzo and Gary Harris will take one more tour of the Big Ten and NCAA Tournament before making a decision to jump to the NBA or not next April.

Michigan State guard Gary Harris has decided to forego early entry to the NBA Draft and stick around with coach Tom Izzo for another year – at least – because he is in no hurry.  He never has been in a hurry.

It’s the right thing to do because Gary Harris’s defining characteristic is doing the right thing.  Sometimes the man’s actions define what’s right, and that’s the case with Harris.

When Harris was a high school basketball player, he was also an outstanding wide receiver at Hamilton Southeastern High School in Fishers, Indiana.  Not only did Gary not commit early to a school to play basketball, he didn’t commit to a sport to play in college.  Instead of focusing on basketball as though it was his holy vocation, he continued to play football even after pledging Michigan State in hoops.

His parents are smart.  They were both athletes, and they have always been relaxed guides for their son.

Those who haven’t been there before tend to act be impatient sellers.  The key to a happy life is learning to enjoy where you are while keeping an eye out for improved opportunities.  Harris has dreamed of playing in the NBA – why wouldn’t he – but he and his family are also well aware that hurrying into what’s next often cheats both the pleasure of the present and the promise of the future.

The traits that make Harris a great leader also serve him very well as he navigates life.  He’s smart, aware, savvy, and unflappable.

Basketball is a unique sport in that fans and coaches are right on top of the action, and nothing shields the character of the players from them.  There are no pads, helmets, face masks, shields, or hats.  Every grimace, indifference glance, flash of anger, or wince of pain is evaluated and processed.  All of it reinforces our interpretation of a player’s character, and 99% of the time what we see is what we get.

Izzo liked what he saw in Harris and got it.  Harris saw what he liked in Izzo and pledged Michigan State.  Now they’ll have another year to help each other get what they covet.