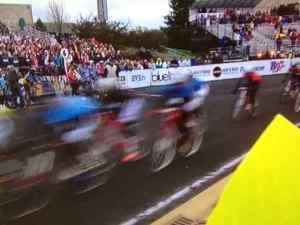 A bunch of cold gals are riding bikes in circles today, and the guys will do the same tomorrow.

There was nothing like Little 500 weekend when I went to school at Indiana University.

The bike race that is the centerpiece of the weekend long series of events to celebrate the end of the school year gives students a chance to blow off a little steam.  It was made famous by the 1979 film “Breaking Away”, but made fun by high-energy, low academic standard students like me.

The race doesn’t pack in the crowds like it did in the aftermath of the film’s release, but for some there is still some wonder and awe in sneaking liquor into Bill “Army” Armstrong Stadium for a messy laughfest as a bunch of fitness nuts peddle at their own peril around a quarter mile cinder track.

The Indiana University Foundation runs the race, and when Bill Armstrong was the head of the Foundation, there was no doubt in our pointed little heads, that he enjoyed himself as much as we did, and while not sanctioning the stupidity we authored, he might have had a couple of belts himself before the race.

Now, there’s a lot of posturing about how cycling and scholarship go together, and how that is the point of the race and its collar events.  While there might be a dozen or so students, excepting the participants, who care at all about the young women and men on single gear racing bikes, the majority are there for the party.

Our choice was to hide the party in plain sight.  We walked through the gate each year with gallon jugs filled with screwdrivers – dozens of them.  We shared their contents liberally and hosted our own party in the northwest bleachers.  What qualified as hilarity for us ensued, and before we knew it the race was over.  Who won?  In our minds. we did.

We yelled impossibly vulgar things at the blue blazer clad members of the IU Student Foundation Steering Committee who walked in front of our area like super-officious junior republicans.  It took minutes during our first year to notice in the event program the composite photo of the committee complete with names underneath that made identifying them simple.

We would see a girl approach, find her in the picture, locate her name, and yell, “Hey, Rachel!”  She would stop and turn in front of the bleachers filled with several hundred students and alums.  As she looked into the crowd to find the ‘friend’ who called her, one of us would yell, “You get home okay last night?  We’ve never seen anyone projectile vomit like that!”  They would avoid our area for the rest of the race.  No matter, there were dozens of these nuts proudly wandering around.

The grand marshalls gave us opportunities for fun.  Senator Richard Lugar seemed to ride in the pace car damn near every year, and every year, Pauly Balst would start the chant “Dick Lugar, not Indiana!”  Lugar would always smile as he vaguely made out his name, and then scowl when he heard the full chant.

Sure, it was childish, but no apology for our behavior is forthcoming.  The self-assured and cocky need a bit of a course correction, and that is a service we remain proud to have provided.  There were rarely casualties of any kind other than the pride of those who either crossed us or joined us.

I’m watching AXS TV’s coverage of the Women’s Little 500 as I write, and immediately before the race, the public address announcer intoned, “If you are in the infield and not wearing official credentials as a participant or official, please move to the stands or spectator areas.  Only properly accredited personnel are permitted in the infield during the race.”  Nice speech.

We created our own laminated credentials our last two trips, and we were allowed access everywhere as “Special Provosts.”  Not sure what a special provost does, but it was official enough a title to allow us a broad path of access and curious behavior.

We’re not making the trip south down the Ruel W. Steele Highway to Bloomington this weekend – our last foray into this harmless but silly daylong revelry was in 2009.  Walking up to the gate with our jugs – always a little nervous about the prospect of winding up in News of the Weird for being arrested, we were welcomed like old friends and were guided to a special gate.

It’s a great weekend, and while it would be generous of us to school the current generation of knuckleheads that it’s not about how much you drink, but how hard you laugh, and how enthusiastically you mock the self-important, it’s just too damn cold this weekend.  A high of 52 is frigid on those metal bleachers, and regardless of how much good we could do for college students in need of a little advice at the Little 500, common sense must prevail – for once.