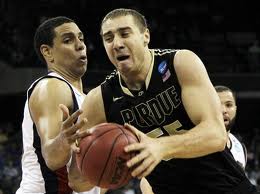 Will Sandi Marcius relocate to the other Big Ten basketball program in Indiana?

With Maurice Creek leaving Bloomington for a program closer to his child, the Hoosiers have a slot available, and coach Tom Crean can do one of four things with that scholarship.

Crean can stand pat, pleased with the six returning players and six incoming freshmen.  There is the option of pursuing an uncommitted incoming freshman – the only kid remaining in the Top 100 is top ranked Andrew Wiggins.  He can gift the scholarship to one of the many walk-ons who bust their asses while paying their own way.  Or, finally, Crean can grab a kid who has a single year of eligibility and thus can compete immediately.

Personally, I love the idea of putting a walk-on on scholarship for the year.  Walk-ons are unsung heroes, and if that had happened to my son, we would have had a party that would still be raging.  Barring that selfless decision, I’m a big fan of grabbing a graduate with a year left.  The risk is non-existent and the upside can be decent.

There are currently 21 graduates and soon-to-be graduates who are transferring and would be eligible for a single year beginning next season.  There are four I would give a little thought to before telling Jeff Howard he’s the man – until it’s given to a freshman next year:

Sandi Marcius, 6-9, Purdue – This would be a pisser both for the Boilers and the Hoosiers, as Marcius is not quite good enough to help the Hoosiers a lot, but every little bit of production would be like paper cuts to the Purdue fans.  Teams in the Big Ten can never have enough size, and for his flaws, Marcius is big at 6’9″, 270 lbs.  I’ve read the rules on graduate transfers, and I am unsure whether Purdue grants the waiver prior to the naming of the school Marcius plans to contact, or whether the waiver must be granted for each contact.  This is why schools have big compliance departments.  If Marcius must ask for an Indiana specific waiver, this entry may be deleted from the list of possibilities.

Mike Moser, 6-8, UNLV – A hell of a good player, but he is said to be on his way to Washington.  Moser a forward who was injured most of last year, but in his sophomore year averaged 14 ppg and 10 rebounds.  He was originally at UCLA, but left after his freshman year.  Tough to tell whether a kid is worth the risk, but for a year, there aren’t too many chips on the table.  He’s from Portland, OR, and seems to have an affinity for that part of the country.

Errick Peck, 6-6, Cornell – This is a vanity pick for me, as I love Errick Peck as a kid and player.  The Indianapolis Cathedral product spent the last four years in the Ivy League, and scored 10 ppg over the last two seasons.  He’s athletic, smart, and very coachable.  He looked me in the eye and did what I said during the rec game in which I coached him.  If that doesn’t make a kid coachable, I don’t know what does.

Allen Roberts, 6-3, Miami (OH) – Played 27 minutes a game, averaged 12 points and three boards.  He’s a geographic fit from Ohio, and is a reasonably adept three-point shooter at 35%.  He scored in double figures 21 times for the 9-22 Red Hawks.  Indiana is short a shooter, unless one of the incoming freshman can fill that role.  He fills that need, but is he a better player than what is coming in the freshman class?