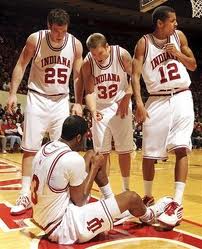 The sad saga of Maurice Creek has ended in Bloomington

The math is now swinging in the opposite direction as the Indiana Hoosiers will for a time have one more scholarship available than people hoping to claim it, as Indiana announced today that Maurice Creek will forego his last year of eligibility in Bloomington to play closer to his home in Maryland, where he has a child.

Creek will be eligible to play immediately at a school where he can start, play increased minutes, and help raise his child.

Creek’s career started very strongly as he was the one player as a freshman in 2009 who could be counted on for offense.  He averaged 16.4 points, and was the best player on the floor during the game against Kentucky that featured John Wall, Eric Bledsoe, Patrick Patterson, DeMarcus Cousins, DeAndre Liggins, and Darius Miller among others.  His 31 points led all scorers as he single-handedly kept the Hoosiers in the game into the early portions of the second half  At the end of the non-conference season, Creek suffered a catastrophic knee injury, and was never quite the same.

His story in Bloomington will always focus on what might have been.  Unable to play at the pre-injury level, it was humane and decent for Crean to give Creek an accurate appraisal of his future in Bloomington.

The question now becomes what Crean will choose to do with that scholarship.  He can bank it for 2014-2015, or look for a seventh member of the incoming freshman class.