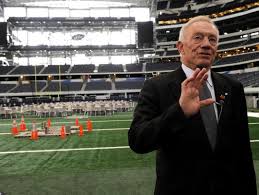 Sure, Jerry Jones is a twit, but his house is beautiful and deserving of the first College Football Championship Game.

For all of the qualities Indianapolis brings to the table for events, sexy is not among them.  Convenient – check.  Fun – check.  Friendly – check.  Did I say convenient?  Check, again.

There are three real football conferences (SEC, Big 10, Pac-12) and two halves of a fourth (ACC & Big 12).  The championship game should rotate through the best stadia in those regions.  The best in the middle of Big 12 country is Cowboys Stadium, and it gets to host the first in January, 2015.  In the southeast, the new stadium in Atlanta should be in the rotation when it’s completed.  The Pac-12 can rotate through the Rose Bowl, the L.A. Coliseum, and the tin can in Glendale until the new stadium in LA is built, if it’s built.

In the midwest, there is one stadium in a decent city that fills the bill, and that’s Lucas Oil Stadium in Indianapolis.  Detroit has Ford Field, a fine facility with only one problem – it’s in Detroit.  Traveling with the Rams last year, we visited Detroit.  Stayed right in the middle of what might have been a thriving downtown forty years ago.  We walked at least four miles to find a sports bar before finally hopping in a cab.

Indianapolis was literally built to host major sporting events, and Lucas Oil remains one of the best venues for a big time sports.  Because of the Super Bowl, organizers know that Indy can handle the traffic and nightlife needs of the cigar chomping, scotch swilling, fluorescent blazer wearing boosters and alums who will fly in for the weekend.

And when they do fly in, the drive from the airport to the hotel is 12 minutes.  When it’s time to walk from the hotel to the stadium?  It’s likely a quarter mile or less with many bars on the way.

In the case of Dallas, nothing there is close to anything else, but I cannot argue with the fact that Cowboys Stadium is a palace.  It is without question the best stadium in America, and perhaps the world.  Every detail is perfect, and the staff is friendly.  Is the giant TV a little ostentatious?  Hell, no.  TVs are like the late Anna Nicole Smith – no demerits for big!

Bill Hancock, executive director of the College Football Playoff, said Arlington was awarded the first game over Tampa because of Cowboys Stadium, which can hold more than 100,000 fans.

Bill Hancock, executive director of the College Football Playoff, was asked why the Dallas area was chosen.  He answered, “The stadium itself, everything about the stadium,” Hancock said. “It’s still the stadium with a capital ‘T.”  No word on whether the media questioned Hancock’s assertion that a capital T has anything at all to do with Cowboys Stadium.

People will ask about January weather, and the city’s answer should be – who cares?  In Indy, there is no need to wander in the elements at all.  Everything meaningful can be accessed through tunnels and habitrails, and for the restaurants and bars, fans and gawkers might have to walk or cab a block or two.

I may not be asked to author the bid on behalf of the city because of my habit of comparing the size of all things to breasts, but that doesn’t diminish the level at which Indy delivers a great experience for fans.

Plus, the chances of Indy giving a school a relative home game for the championship are quite slim unless Purdue or Indiana has a meteoric hop up several levels in the next three seasons.