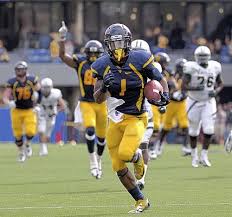 The Rams hope that Tavon Austin will run away from NFL defenders as easily as he did at West Virginia.

One thing Rams fans know for sure is that Rams GM Les Snead and coach Jeff Fisher aren’t concerned with where the NFL decides they should choose in the first round.  Last year, they traded down twice to wind up at #14 where they took DT Michael Brockers, and this year they moved their original pick from #16 to #8 to grab dynamic offensive weapon Tavon Austin, and traded down to #30 with the other to nab OLB Alec Ogletree out of Georgia.

I had the Rams using their original slots to take Austin at #16 and Ogletree at #22.  The cost for moving up was their second rounder (#46) and third rounder (#78), and the bounty for moving up was a third (#92) and sixth rounder.  So they are a net even in human beings but will have to wait 46 picks later to replace the player they could have had in the middle of the second with the guy they can now get toward the end of the third.

No matter.  It seems the Rams find a way to draft the players they like, and will move to do it.  In Day One, the Rams decided who and what was needed and took them where they fell.  That gets them an A+ through the first quarter of this course.  We won’t know the names of most of the young men who are drafted today and tomorrow, but if last year is a reasonable benchmark, fans will in four months.

Tavon Austin is one of the missing links between franchise quarterback and great success.  For all the warm bodies the Rams have run through the wide receiver position over the past two seasons, only Chris Givens appeared capable of making a big play.  Givens broke a rookie record last year by catching balls in five straight games of 50 yards or more.

Danny Amendola was a slot machine when healthy, but as the saying goes, “You can’t help the club from the tub.”  He played 12 games in 2011 and 2012, and the risk did not justify the expense.  Brandon Gibson was a good worker bee, but nothing more.  Austin Pettis is entering his third year when receivers either emerge as a player or a guy.  So far, he’s been just a guy.

Brian Quick remains the key for the Rams receivers, even with the draft of Austin.  He has all the physical tools, but lacked the football acumen to make the line of scrimmage reads and adjustments to stay of the field.  He came from an offense at Appalachian State that didn’t use a playbook, and his football IQ suffered as a result.  With a full offseason to learn the position and offensive coordinator Brian Schoettenheimer’s complicated offense, he should be in a position to use those physical tools to catch more than 11 passes.

Two other piece of what will be a much different offense than last year’s will be tight ends Lance Kendricks and free agent signee Jared Cook.  Kendricks came into his own a bit last year with 42 catches for 519, and Cook who was shiny tool underused with 44 catches for 523 yards.

Austin though will be dynamic both as a receiver and return guy.  The easiest description of this guy’s primary talent is that he can make people miss – badly.  He’s small, but that size didn’t cause problems while at West Virginia.  Reportedly, he never missed a practice, much less a game.

The Rams in 2012 (let’s just forget about 2011) moved the chains to move the ball.  The offense was not geared to the big play, and minus deep balls to Givens, were plodding.  Their leader was Steven Jackson, who will take a lot of positives to Atlanta for 2013.  He’s consistent, but no longer capable of running away from anyone.  With the addition of Austin, the Rams have changed the way defenses will have to prepare to face them.  He is a headache, and the Rams have been without a headache since Marshall Faulk retired.

Ogletree is a guy that eyes moved toward as you watched Georgia play last year.  He makes big plays.  He has warts, which made him available at #30, but they aren’t warts that can’t me overcome.

A suspension for a positive banned substance test took away cost him the first four games in 2012, and there was the DUI prior to the NFL Combine, but the Rams showed that they can help a guy with decision making issues stay on the field last year with Janoris Jenkins, who missed one game in San Francisco for a little weed use on that road trip.

There are on field issue for the former safety – like over pursuit and not being able to fight of blockers – but the guy has great speed, a nose for the ball, and some nastiness.  He reminds me of a former teammate of Fisher’s with the Bears – Wilber Marshall, who was fast and ferocious.

What’s on the mind of Snead and Fisher tonight as they are schedule to grab two third rounders must be a safety or two, and a running back if a good one slips.  But, as both the Rams and Colts showed last year, there are good backs to be had late – the Colts found Vick Ballard in round five, and the Rams waited until the seventh to tap Daryl Richardson.

Six-time NFL Executive of the Year Bill Polian said this morning on ESPN, “There are two things you look for in the draft.  The first thing is you look for a guy who can change the game on his own ability.  The second thing you look for is a guy who’s going to play at a high level for ten years.”

Time will tell whether Austin and Ogletree last a decade in the NFL, but for Rams fans, so far so good – at least.