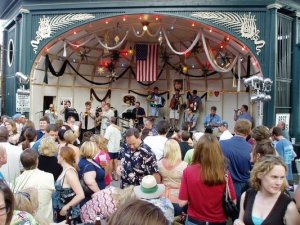 What Murray the K was for the Bealtes, Jeff Pigeon was for the band that will play tonight at the Rathskeller’s Biergarten.

There are events that close Winter every year for people.  Some look at the NCAA Basketball Championship as the time to swing from Winter inactivity into garage cleaning, house airing, garden planting, loosening the arm, and unpacking the shorts.  For others, it’s the Masters.  For the especially impatient, it’s the running of the Daytona 500.

For me, it’s the opening of the Biergarten at the Rathskeller with Polka Boy, a formerly obscure band of friends from the Indiana University School of Music who would converge four or five times each year to play a fusion of polka and rock that they found fun.

One of those early gigs was at an anniversary celebration for the Legal Beagle.  Anyone who’s been at the Beagle knows the place is tiny, and the band has somewhere in the neighborhood of 14 members.  That took up a significant portion of the available space.  Jeff Pigeon was the host of the WIBC Morning Show at the time, and Pidge loved these guys so he invited a bunch of people from the station to enjoy the band.

For a couple of years, Pidge had played “I Don’t Wanna Do Dat” as the show’s Friday anthem, and Polka Boy played it for the crowd at the Beagle.  The place went crazy with the call and response portions of the song.  That surprised us as the demographic for WIBC was thought to be, even by people who worked there, as 55-to-dead.  There were people in their 20s singing along, and the floor on the second floor shook as the fire code violating crowd danced.

Fast forward to the 2:00 minute mark of the video to hear what Pidge did.  Watch the whole thing to get a feel for the fun that will be be had tonight at 7p with a truly unique band.

We had a great time, and every event Polka Boy played was celebrated by Pidge with band interviews and endless mentions of the band and venue.

Polka Boy began playing more and more dates, moving into the very spacious biergarten at 401 East Michigan, and with Pidge’s unending support, the crowds grew and grew to the point where the area is filled to capacity.

Hearing the band play “I Don’t Wanna Do Dat” when I see them, and hearing everyone in the crowd participate reminds me of the power of radio, Pidge’s keen sense of what listeners enjoy, and how much fun it was back in the day to work at a fun place before 9/11 turned all news media serious.

It’s been awhile since Pidge stumped for Polka Boy, helping them transform from a band of hobbyists into a serious business enterprise, but tonight as a full house answers “Do you wanna do a shot with me?” by yelling “Ya, ya, ya!”, I’m hoping that I’m there with Pidge to remember from whence they came – all the way from the Legal Beagle.

The weather should be clear with temps in the upper 50s.  That’s polka weather, and at the end of the night Spring will finally be here.