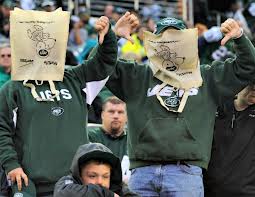 Multiply these two boobs by a couple of million, and that’s what Geno Smith has to look forward to through his rookie contract.

Life is too short to spend any of it on the New York Jets roster.  Rex Ryan is the ringmaster of a dysfunctional circus that draws a crowd of irrational malcontents.  He has no chance to succeed because the team is incapable of success.  Smith could go 21-of-22, and Jets fans would spend Monday morning yelling about the incompletion.  The team could go 15-1, and the fans would lament the loss.  Smith can be a good quarterback, but he’ll never be Joe Namath.  In four years, he will leave New York a shell of his former self, following in the footsteps of Richard Todd, Ken O’Brien, Chad Pennington, and Mark Sanchez.  The Jets are to the NFL what the Cubs are to Major League Baseball.  Even when they don’t suck, fans believe they do.  It’s in the fans’ DNA to destroy their own QBs.

There haven’t been too many players the Pacers dealt or lost through free agency that are worth wishing well.  It would take a fan of generous spirit to hope for the success of Jermaine O’Neal, Stephen Jackson, Jamal Tinsley, and affable psycho Ron Metta World Artest Peace, but Jarrett Jack was different.  The Georgia Tech product was only in Indianapolis for one season, but the passion he brought to a unit that had been without it for years was refreshing and appreciated.  He gave a damn, and brought a really different vibe to the blue and gold.  When he signed with the Toronto Raptors after the 2008-2009 season, the Pacers missed more than his 13.1 points.  He made basketball fun again for fans and teammates.  He seems to be having some fun playing for the Golden State Warriors in the playoffs, ironically for a coach that made basketball fun for a time in Indy – Mark Jackson.

UFC is a weird sport in that people are either devoted to it or totally disinterested in it.  So either you know and respect Dana White, or you have never heard of him.  UFC 159 will be held tonight in Newark, and available in your home on pay-per-view for $54.95.  That a whole bunch of people pay that price to watch a couple of guys in shorts knock the hell out of each other in a cage is testimony to White’s marketing genius.  As boxing continues to circle the drain in America, the popularity of ultimate fighting is growing exponentially.  White is worth more than $150-million because he had the stones to talk a friend into buying UFC, and then ran it the way boxing should be.  I won’t spend the $54.95 tonight, but I’m a big fan of smart guys, and White is definitely one of those.

The NFL Draft will continue at Noon today with rounds four through seven, but to this point no team has helped itself more than the St. Louis Rams.  They play in the brutally tough NFC West along with the 49ers and Seahawks, but while those two teams continue to get the headlines, the Rams just keep improving themselves everywhere.  In free agency, the Rams grabbed TE Jared Cook and LT Jake Long.  In the draft, they found a way to maintain their tonnage of players while taking both primary targets – WR Tavon Austin and LB Alec Ogletree.  On day two, they took safety TJ McDonald and short but sturdy West Virginia WR – 5’10” Stedman Bailey, who caught 114 passes for 25 TDs (he caught 13 for 303 and five TDs against Baylor alone).  The Rams were the youngest team in the NFL last year, and are likely to be younger yet in 2013.  It’s a little early to pick teams for Super Bowl L, but the Rams appear to be on track for prolonged excellence.  Fans will get a taste of it next season.  The way they are being built is reminiscent of the Bears in the early 1980s.  The only hole is at running back, and maybe Isaiah Pead and Daryl Richardson might be a serviceable two-headed monster while the team waits for the opportunity to draft the right guy.  Today will be a big day.  I would love for them to take Marcus Lattimore.  Even if he craps out because of injuries, the upside is worth a late round risk.

The Indiana Pacers will play tonight at 7:00p (ET) against the Atlanta Hawks in Game Three of their playoff series, and if the Hawks have any pulse at all, they will unpack the brass knuckles, and wage war.  Their only chance is to assert a menacing presence and make it tough for the Pacers from here on out.  If you’re going to lose, make yourself a pain in the ass to play against.  So far in two 15+ point Pacers victories, the Hawks have been very accommodating.  The Pacers on the other hand need to elevate their level of play to squash all hope for the Hawks.  At 2-0, the series is all but over.  The Hawks are unlikely to find a way to win four-of-five the rest of the way, but a win tonight would allow that bunch of free agents to leave Atlanta with a little pride.