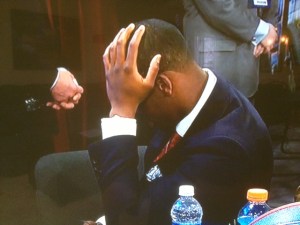 Geno Smith’s unhappiness over being passed over in the first round of the NFL Draft is shown live on major networks television.

No question there is great drama in both the elation and disappointment by the young men on hand for the NFL Draft at Radio City Music Hall.  Inevitably there are a couple who are blessed by being taken before they were projected, and there is also the annual poor sap who sits as his peers are taken before him.

The tables empty one after another, and the cameras begin the gather near the kid still sitting and hoping for his name to be called.  The kid is not accustomed to this level of attention or disappointment, and that sets in motion the collapse of a set of dominos that makes for great television.

Last night, the West Virginia quarterback sat and waited, and then waited some more.  Finally, he left the green room with his family rather than sit through any more of the agony.

He’ll be back tonight to wait for somebody to decide he’s worthy of being selected.  It might come early, but it might not.

Most high school athletes have been on the bubble of making or missing a cut, and walking up to the sheet to see if your name is on the roster can be nerve-wracking.  I also got this feeling every time I checked test scores during my extended stay at Indiana University.  Just thinking about it now, I have knots in my stomach.

Imagine that being repeated 25 times in three hours.  That cycle of relentless hope and disappointment would cause beasts of men to wither.  Smith shrank in his seat a little bit last night, and the networks who preyed upon this kid’s sadness should be ashamed.

The job of every network is to capture the moment – and the more dramatic, the more viewers.  That is the name of the game, but at long last, have they no shame?  Is there no line beyond which they will not cross to invade the psyche of a young man who had no idea what he was signing on for.

There are times that people need to back off and let someone feel terrible without it spilling into millions of home.  Could Smith have sacked up, ridden out the storm with a smile, and earned some points as a good guy facing adversity with a smile?  Sure, and he did that early.  Then the obvious reality set in that his name wouldn’t be called.  His head went in his hands, and he decided to head back to the hotel as millions of dollars slipped through his fingers.  His immediate joy over being able to financially help his family gone – as they sit right next to him.  Joy turning to sorrow with every pick.