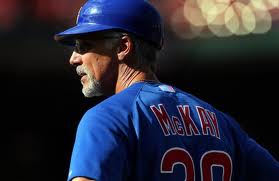 A gray beard is the only thing that makes Dave MacKay look like he shouldn’t be playing shortstop instead of coaching first.

A first base coach can be a drinking buddy for the manager – a bobo who hits pregame fungoes and tells the baserunners on first how many outs there are.  They say things like, “Make the line drive go through!”

Or he can be a key component in the rebuilding of a consistent organization.

Since 1986, Dave McKay was Tony LaRussa’s guy in Oakland and St. Louis.  Most fans only know him as the coach about whom they ask, “How the hell old is Dave McKay?  He’s been a coach forever, but looks 40.”  He’s acknowledged as one of the best defensive outfield coaches in the game, but more than that he knows what it takes for a franchise to build a winner.  And by the way, he’s 63.

He almost retired along with LaRussa after the 2011 World Championship in St. Louis, but when the Cubs called, he asked Tony for permission to join the Cards’ chief rival.  Given the green light, McKay packed all he knew for Chicago, and the Cubs have benefitted every day since.

The Cardinals have a notebook that everyone in the organization learns from called, “The Cardinal Way,” an ever evolving guide for how the Cardinals do everything on the baseball field.  George Kissell began putting it together in 1968 as a roving instructor, and never stopped.  There are contributions by dozens of men who contributed to the Cardinals through the decades.

It shows where cutoff men should be positioned, how leadoffs are taken, who covers what base and when, and serves as a unifying document that allows everyone associated with the organization to learn baseball the same way..

McKay is serving as the Cubs version of Kissell, as the team tries to build its own book to teach the youngest of farm hands how to play, so when they get to Wrigley Field, they can be plugged right in and know how the major leaguers play.

It’s difficult to fathom this has fairly elementary instructional paradigm never occurred to anyone in the 138-year history of the franchise, but it didn’t.

McKay is not only teaching left fielder Alfonso Soriano not to leap into the air to catch a routine fly ball, he’s working on something that will lay the foundation for organizational instruction forever, and allow the Cubs to make up the significant ground that lies between the Cardinals and the Cubs, despite the 45-year head start Kissell gave the Redbirds.

Successful companies emulate the activities of other successful companies, and the best way to do that is to hire their people.  When the Cubs hired McKay, they didn’t get a bobo, they got a winner who will one day be revered as the guy who taught Cubs baseball the same way Kissell did for the Cardinals.

I’m not a fan of buying jerseys.  They need to mean something to me.  In St. Louis, I bought two game worn jerseys.  One belonged to my friend former slugger Chris Duncan.  The other was McKay’s.

When people chart the traction of the Cubs as the onfield product improves from rookie league to Wrigley, an immensely important link in that chain will be Dave McKay.