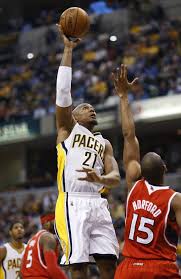 Beast mode is a tired and overused phrase, but David West in last night’s Game Five was in full beast mode.

Prior to Game Five, I posted the 10 things the Pacers needed to do to beat the Atlanta Hawks in that pivotal game.  They won 103-86, so it’s easy to assume that a lot of what the Pacers did was right, and that they kept the Hawks from getting much done themselves.  Two quick takeaways – the Pacers played very well, and I am very smart.

Here are the 10 areas the Pacers needed to address and how they did:

10 – Stay in front of Jeff Teague – A+  Teague was 3-of-16 from the field for seven points.  He made zero shots in nine attempts from outside the paint, and was frustrated throughout.  The technical Teague picked up for shoving Paul George in the back  for shoving Paul George in the back with 5:50 left in the third quarter was the first time I’ve seen him lose his cool – all the way back to the fourth grade playing for Riverside.

9 – Paul George adjusts to different defenders – A  George missed only one shot in his eight attempts, with 10 rebounds, five assists and one turnover.  Whatever tricks Hawks coach Larry Drew tried to play with his defensive rotation – or didn’t – were ineffective.  George was crazy efficient – 21 points in eight shots defines efficent.

8 – No silly fouls – A  The Pacers played tough, physical defense that forced the Hawks to pay a price for getting to the rim, but the only player to amass five fouls (in nine minutes) was Ian Mahinmi, and that doesn’t qualify as a problem.  Overall, the Pacers committed 30 total fouls, but virtually all on the defensive end were about taking away what the Hawks wanted to do.  The officiating was screwy all night, so it’s hard to separate the bad calls from the silly fouls, so some benefit of the doubt is reflected in the grade

7 – Skinny up the rotation – B  The minutes allocated to the bench were better used than in the first four games.  With a brief exception, three or more starters remained on the floor throughout the first 45 minutes (until the starters, minus Lance Stephenson, were pulled).  There is still a precipitous drop in play when the wrong combination of players are on the floor together.  The Pacers turned to ball over 10 times in the first half, and three belonged to Tyler Hansbrough, who must take better care of the ball.  D.J. Augustin played a productive 25 minutes on defense.  Shooters can’t indulge a conscience, and Augustin has no worries there.  He made his final two threes to finish 3-of-9 behind the arc.

6 – Hack-a-Hawk – B  The Pacers committed 30 fouls that sent the Hawks to the line 37 times. The Hawks made 31 of those shots, showing that they can find the bucket.  If you back out Josh Smith’s typically brutal 3-of-7, the Hawks only stayed in the game because of their excellent foul shooting.  Maybe this should be amended to Hack-a-Josh, but the hard fouls caused a disruption in the Hawks offensive flow, and that was important in racheting up their level of frustration.

5 – Let Josh Smith be lazy – A+   Smith was 1-for-6 from outside the paint.  His shots were reduced in every quarter from six to five to three to two.  Part of that stemmed from his reluctance to defend with his feet as he picked up five fouls, but as the game went on, Smith seemed less and less interested in playing hard.

4 – Get to the line 30 times – A  Got to the line 35 times, making 29 shots.  Foul shots are important because they shows a dedication to playing aggressively on the offensive end.  Settling for jump shots is death in the NBA.  The Pacers got the ball down low often, and when David West scores 24, the Pacers are a tough out.

3 – Limit second chance points – A-  The Hawks missed 50 field goal attempts last night, and were only able to rebound six of them.  Only once did the Hawks convert after an offensive rebound – Kyle Korver’s only made three of the game.  That’s the reason for the minus.  You don’t leave Kyle Korver on the offensive end until the ball is possessed.  Period.  (See #1)

2 – Remove humanity from equation – I  This is an overall mindset that can’t be accomplished in one game, or even one season, so the grade is an incomplete.  The Pacers will either be heartless competitors, or they won’t be.  That will be determined after this group disbands.  David West is the closest to the type of win-at-all-costs guy we are looking for.  His personal 10-point run in the second quarter was bad-ass (it would have been 12 if not interrupted by a D.J. Augustine make on a technical free throw for a Hawks defensive three seconds call).  Those 12 points, plus the Augustine freebo turned a 31-28 deficit into 41-35 lead the Pacers would not relinquish.

1 – Stay with Kyle Korver –  A-  Sweet work by the defenders who matched up with Korver, who was limited to five shots, two makes, and 10 points.  The lone mistake was not finding him after an offensive rebound.  I’m a tough grader who requires perfection, so the A becomes an A-.  If I get a call from George Hill’s parents, I’ll explain that there is no curve in grading playoff performances.

Now the question becomes how the Pacers can put together a solid 48-minutes like this in Atlanta.  If they can’t, we do this all over again at Bankers Life Fieldhouse on Sunday for a Game Seven.

I don’t spend a lot of time talking about Frank Vogel, but I thought the game plan and rotation for Game Five was just about perfect.