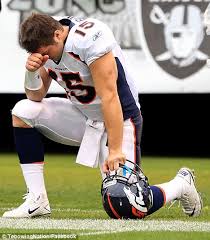 Be honest.  If your job was to assemble a winning team in the NFL, would you sign currently unemployed quarterback Tim Tebow?

Most GMs would sell their children for another win or two, so if Tebow was a guy who could provide that, he would have a gig.  All else being equal though, there is no chance that a GM is going to invite endless national media scrutiny, phone calls, and the irrational level of support Tebow prompts.

When the point that Tebow places last in completion percentage for any quarterback who has started 14 games since 2010 is answered by, “Well, he’s a great Christian who has won!” or worse, “He won at Florida!”, a smart person knows any chance for a reasonable discussion is over.

When it’s mentioned that once the NFL figured out how to defend the Tebow led offense, the Denver Broncos went 1-4, the answer is always that the one win was in the playoffs against Pittsburgh.

To make this extra simple, let’s remove all the mechanical issues about his arm motion and lack of accuracy – although those are certainly the primary issue in explaining the reluctance of NFL GMs in welcoming Tebow to his third team in four seasons.

The reason teams will avoid Tebow like the plague, ironically, is the plague of his supporters who will not stop their incessant jabbering about how Tebow is never given the right opportunity with the right team at the right time.  Because he leads such an upstanding and chaste life, Tebow is deserving of a chance to be his best chance to win.

They are like a million cackling youth sports parents who won’t stop whining to coaches that their little Timmy doesn’t get what he deserves because no one understands how special he is.

Never mind that the coach has no skin in the game, and wants only what’s best for the team.  He’s an idiot because a son is by definition better than his parents.

1070 The Fan’s Dan Dakich has spent a lot of time talking about a caller he dealt with this week by saying, “You can’t argue with stupid.”  He’s right, but it’s broader than that.  You can’t argue with passion – whether it’s for a team, religion, nationality, or other polarizing belief.

People who share beliefs are smart, and people who believe the opposite are morons.  Most of the world’s wars have started as a result of sparring beliefs, and Tebow’s presence on a team invites the passionate support that makes not playing a guy miserable.

A group in Jacksonville sealed Tebow’s fate as a guy who will never play for the Jaguars by starting a petition on www.whitehouse.org.  Football players whose fans start petitions to get them a job are never good candidates.

The kind of people who believe a petition will change the mind of a guy trusted to run an NFL franchise likely worth more than $1-billion (20 are currently at or above that level) are never going to be deterred on their quest, and sadly for Tebow, that makes a career as a quarterback impossible.

The fans of Tebow are to Tebow what Sarah Palin is to the Republican Party.  The guilt by association is too powerful to overcome.

4 thoughts on “If You Were an NFL GM, Would You Sign Tim Tebow?”