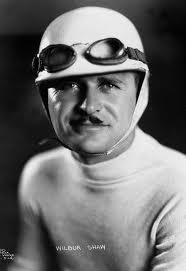 He won three times, but fans at this weekend’s Indy 500 should thank Wilbur Shaw because if not for him, the Brickyard would be a middle class neighborhood.

There are so many men who risked life, limb, and a bunch of cash as the legacy of the Indianapolis 500 was built, it’s hard to pinpoint those who were most instrumental in it becoming the Greatest Spectacle in Racing.  With Wilbur Shaw, it’s not so tough.

Shaw was a native Hoosier who won the race three times, and then urged Tony Hulman to buy the track which was in virtual ruin after being padlocked through World War II.  Hulman stroked the check, and Shaw ran the place.  Auto racing exploded under the guidance of the two friends from 1946 until Shaw’s death in an airplane crash in 1954.

The Indianapolis Motor Speedway is a working museum, and every brick tells a story.  Lives have been lost and fortunes built.  There are thousands of people who show up at the track the Sunday before Memorial Day with cooler filled with beer.  They camp in the Coke Lot from Carb Day through the night after the race, and try to focus of blurry cars as they streak by.

They should take a few minutes to listen to IMS Historian Donald Davidson wax rhapsodic about the previous 96 runnings of the Indy 500 to learn about a time when Indy was about brave men driving their asses off on the edge of reason.