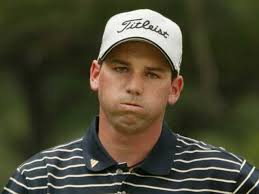 It’s been a long couple of weeks for professional golfer Sergio Garcia.

Sergio Garcia finally went there.  Maybe he’s not old enough to remember Fuzzy Zoeller’s unfunny remarks about the Champions Dinner at the Masters when Tiger Woods first chose the menu, but he went there.

When asked last night whether Garcia would invite Woods to dinner during the U.S. Open week next month, he replied, “We’ll have him ’round every night.  We will serve fried chicken.”

A little later, someone must have told Garcia that he stepped on the third rail of comments about Tiger.  This was the statement Garcia issued through the European Tour, “I apologize for any offense that may have been caused by my comment on stage during the European Tour Players’ Awards dinner.  I answered a question that was clearly made towards me as a joke with a silly remark, but in no way was the comment meant in a racist manner.”

But the comment was racist and offensive, and once those words leave your mouth they are impossible to unsay.  It was as ridiculous as Zoeller’s comment, and should result in the same level of outrage.  Sure, Sergio has the advantage of being from Spain rather than from Floyd County, Indiana, but that doesn’t make the stupidity any less profound.

Conversely, when Tiger was asked whether there would be any effort to bury the hatchet with Garcia, he paused and said simply and directly with the slightest hint of a smirk, “No.”  The room erupted with laughter, and Tiger smiled broadly.  That was funny.

What Sergio displayed was an inability to edit effectively, and even more damning, no sense of humor.  There is nothing wrong with busting balls, but to go toward a man’s race, religion, or sexuality with a dated stereotype is cheap and reflects a keen ignorance of history.

Members of the PGA Tour look like they should be smart guys.  Always well dressed, golfers play a game that requires a certain amount of cash, and cash follows smart, doesn’t it?  Maybe to a point, but intellect shouldn’t be confused with character, and Sergio showed none yesterday.

Famous people often make the critical error of believing they are good at many things because they are applauded for being great at one.  Sergio can’t close tournaments, but he is one of the best 20 golfers on the planet.  He is not funny, unless whacking balls into water while tied for the lead of the Players Championship is funny.

There are plenty of weak spots where Sergio could have gone to get a cheap laugh.  When asked if he and Tiger would go to dinner during the U.S. Open, he could have said, “Yeah, he’s going to bring Lindsey, and I’m bringing Elin,” or “Yeah, we’ll go to Perkins!”  To go to “fried chicken” is dumb, and gives the advantage in this battle to Tiger – a guy that Sergio believes deserves none.