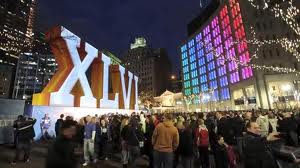 Indianapolis never looked so good as during Super Bowl week, but the lasting effe

The NFL voted to approve the stadium under construction in Santa Clara, CA, and Reliant Stadium in Houston as the hosts of Super Bowl L and LI, and that sets the roster through 2017.  The two cities most discussed for 2018 are Indianapolis and New Orleans.

That’s a testament to the excellent layout of the downtown, the friendliness of the volunteers who gave Indianapolis an excellent national reputation as a friendly town, and the weather which was perfect.

What was almost certainly seen as a one off thanks to Jim Irsay and the city for believing in the NFL product enough to build a $700 million stadium in a 1.4 million person market, has morphed into a spot on the B-List just beneath New Orleans and Phoenix.  Miami has dropped off the radar because the Florida’s state legislature defeated a bill that would have allowed the raising of cash to bring the former Joe Robbie Stadium up to snuff as a Super Bowl hosting facility.

Indianapolis should strike while the iron is hot because St. Louis will join them in the midwest cities with a convenient downtown and cool retractable dome list that is likely to be serviced by the NFL every eight to ten years.

St. Louis is going to get their stadium eventually because no city is dumb enough to allow two NFL franchises to leave town.  It’s going to be expensive, and it should be.  The NFL as played in newer generation stadia is an event, not just a football game.  Owner Stan Kroenke, Missouri Governor Jay Nixon, and St. Louis Mayor Francis Slay will eventually get this this hammered out and then they will eat one of the non A-List wild cards that the NFL doles out.

The NFL had a great time in Indianapolis, and they should sign up again, but Indy shouldn’t wait until St. Louis gets itself together.

The good that comes to a city because of a Super Bowl is hard to quantify, but in the year prior to and the year following the Super Bowl, the downtown area has taken another quantum leap forward with more restaurants, more bars, more stuff to do, and more high end residential space.

What would come with a second Super Bowl is anyone’s guess, but positive momentum would certainly continue, and that would mean jobs, and continued growth.

There is a lot to do with the NBA’s Eastern Conference Finals starting tomorrow, and at least two home events with all the national coverage that goes with it.

Indianapolis is a good city that can take additional steps up the ladder toward great with Super Bowl LII.  It’s worth the investment in man hours and dollars needed to wow the owners.

One thought on “San Francisco and Houston Get Super Bowls – Is an Indianapolis Redux Next?”