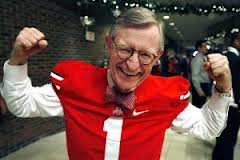 Gordon Gee was either a funny guy who enjoyed the fruits of his office, or a nut who was difficult to accept as the president of a Big Ten University depending upon your perspective.

Stupid is as stupid does, until it’s reported in the media.

It seems the only way anyone is penalized for operating outside acceptable parameters is if the media makes it impossible for any other outcome.

Ohio State President E. Gordon Gee will resign July 1st because the university was having difficulty moving beyond the fallout from comments recorded in a December 5th meeting, but not reported until last week.

In the comments, Gee mocked Catholics, priests, the SEC, Louisville, and former Wisconsin coach Bret Bielema.  He has spent the time between the release of the recordings to the Associated Press under a public records request and the announcement of his resignation apologizing to everyone and undergoing “remediation” to try to purge himself of the impulse to amuse – or attempt to amuse.

These comments weren’t the first from Gee to embarrass the university, and likely wouldn’t have been the last.  The real-life Little Sisters of the Poor took umbrage when Gee claimed Ohio State’s football team didn’t play the Little Sisters of the Poor during their non-conference schedule.  They also accepted a sizable check from Gee as compensation for their pain and suffering.

While Gee is an easy target for the media because he is in love with the sound of his own voice and ability to make himself laugh (as well as oversized trademark bow tie), I am curious who tipped the Associated Press to the existence of the unfunny but mostly innocuous comments made in that meeting.  They surely didn’t make their Freedom of Information Act request based upon random and luck and curiosity.

Somebody – or somebodies – wanted Gee gone, and while this latest episode was regrettable, it certainly was more interesting to the TMZ.com crowd than to the people in charge of SEC schools, Louisville, Brett Bielema, Notre Dame, and Catholics.

Gee knows it, and at the age of 69, made the decision that he would rather spend his time with friends and family rather than subordinates who he can no longer trust.

The media has always served as an excellent cog in the checks and balances machine to discourage hubris, but it has also been very effective as career ruining hatchet in the arsenal of those who don’t mind climbing over ruined careers to reach their own selfish goals.

The downfall of Gordon Gee is a cautionary tale for those who treat meetings where minutes are being taken as a gathering of friends.  Like most arrogant men, Gee’s critical error was to trust, and as a result his post career life of leisure will begin a little earlier than planned.

I have no pity for Gee.  His self-immersed patter about hoping embattled football coach Jim Tressel didn’t fire him were flippant during a time that required disciplined and serious comments.  I’m certain those comments were a significant reason for the heft of the penalty levied by the NCAA.  Had he shown an inclination to raise some hell of his own, the NCAA might have backed off a bit.  If Gee needed to saying anything other than quips goofily about Tressel’s power, he could have taken the opportunity to blast the NCAA for its arcane and pollyannish rules on licensing and compensation of student-athletes.

But Gee went for the quick laugh, and in three weeks, the Ohio State trustees will have a nice lunch for him.  Gee will crate his belongings, and pen his memoirs.

The time is gone when men and women could make verbal mistakes without penalty.  It’s making the world a less interesting place where people now feel that being offended is an actionable defense.