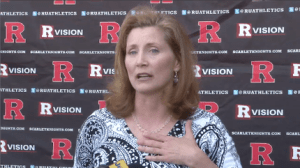 What should have been a time of glee and excitement for incoming athletic director Julie Hermann became something else entirely when Rutgers University’s slapdash vetting work got a boost from the Neward Star-Ledger.

The perfect candidate became quite flawed as some rudimentary journalistic shaking of trees dislodged some fruit that landed on Hermann’s head, when it should have buried Rutgers President Robert Barchi.

That Rutgers didn’t find out about the chapter of Hermann’s career that caused her resignation as the volleyball coach at the University of Tennessee is on Barchi, and he should be the guy on the hot seat.

Hermann isn’t completely without culpability as she lied about her recollection of being in the wedding of a subordinate who successfully sued for wrongful termination based on Hermann’s aversion to pregnancy and babies in the workplace.

She was at the school today to meet with Big Ten Commissioner Jim Delany and the coaches she will oversee when her tenure begins on June 17th.

Hermann explained her decision to pursue the opportunity at Rutgers has not changed due to the frenzied pursuit of an honest reckoning of her career, “The single reason I got into athletics is that I had a great experience being a volleyball player at Nebraska,” she said. “It was game-changing for me. If we can provide 500 or so opportunities to youth for kids to do that, I’ll go to the mat. I’ll deal with it. I’ll put up with it. I’ll deal with a national embarrassment.”

The media was invited to question Hermann for up to 15 minutes, and they asked her about how tough the last couple of weeks have been.  She said it was “heartbreaking” to hear her former players recount their memories of the problems 16 years ago.

That heartbreak is on the hands of Barchi, whose attention to detail is clearly not a strong suit.  His every move and non-move of the last three months has caused problems throughout the Rutgers athletic department.

When the outrageous video of men’s basketball coach Tim Rice throwing basketballs and gay slurs at players was circulated through offices at Rutgers, Barchi never requested to see it, and as a result athletic director Tim Pernetti was fired for accepting the recommended too-light-in-retrospect suspension and $75K fine imposed at the time.

Three months later, the tape was leaked to the media, who showed it to a horrified nation.  Both Pernetti and Rice were fired, as was the university counsel who allegedly recommended the suspension and fine.

Eddie Jordan was hired as the basketball coach, and was introduced as a graduate of the university, when he was not.  There was no athletic director, so we might assume Barchi at least glanced at the resume’ for the candidates, and had some measure of input in the decision.

Then, the search committee for the AD position was virtually ignored until the final stages of the process as Hermann was hired.  The media significantly one-upped the company hired for $70,000 to conduct background checks on the candidates.  And Hermann walked naively into the hornets nest of media when the announcement was made that she would be the person trusted to lead Rutgers into the Big Ten.

Twelve days until her first day in the office, Hermann looked and sounded like a different woman today as she admitted how difficult this has been.

I hope she remembers who caused that pain, and how good Barchi is at using subordinates as career shields when the inevitable problems arise within the department.

Two lessons she should have learned through this torment – lying to the media is done at your own peril, and Barchi is not going to leave himself vulnerable if you screw up.  If coaches misbehave, get Barchi to make a recommendation – in writing, with witnesses.

Ahh, the joys of middle management.