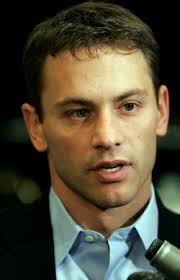 Jed Hoyer is the GM of the Cubs, and I hope his actions make more sense than his words.

I’m not sure whether Chicago Cubs General Manager is an idiot, full of crap, or made an inept effort to cover for his team yesterday on Buster Olney’s podcast.

Below are quotes followed by unpleasant realities:

“Usually you draft starters in the draft, and a lot of the best relievers are failed starters and I think you have to really do that year after year after year. I think that’s how you end up with a good bullpen. Going out in the offseason and deciding, OK, we’re going to spend money on the bullpen, that’s a total fool’s errand.”

Except that the Cubs went out and spent $9-million to sign Kyuji Fujikawa for two years, who proved Hoyer’s point by requiring Tommy John surgery later in June.  [Note for Tom Ricketts accountant – Hoyer’s inability to follow his own sage wisdom will require you to draw a line through that $9M as lost capital.]  For the $9M, the Cubs enjoyed 12 innings of work from Fujikawa, and an ERA of 5.75.

“The culture of the Cubs was always, swing early in the count, walks were never something that was emphasized. It’s a really slippery slope, you don’t want to have a bunch of passive hitters on your team. At the same time, walks are indicative of a good approach at the plate, and we don’t have that. We’ve tried to bring in hitters…Rizzo has a good approach at the plate, DeJesus is excellent, Nate Schierholtz, Valbuena’s a good on-base guy. But a lot of the guys we inherited have struggled with that adjustment, and something we have to keep on pounding away at. We’ve said, if guys we inherited aren’t going to do that, we have to find other people because we’re just not going to win baseball games if we don’t get on base more.”  Hoyer went on to say this about Castro, “He’ll figure out the on-base thing.  He’s just in a slump right now.”

Where to start.  If Castro is in a slump as far as walks, it’s been haunting him since birth.  Castro has never shown any discipline in any part of baseball.  His on base percentage has regressed in the past four seasons from .347, to .341 to .323 to .289 this year.  He’s never walked more than 36 times, and is on pace to walk exactly 30 times this season.  As for Schierholtz, his great approach at the plate has led to six walks in 154 at-bats.

Travis Wood, a pitcher, was not mentioned by Hoyer, but he sports an OBP higher than all but three of the Cubs starting eight.

The Cubs’ bench, of whom only Steve Clevenger and his nine ABs were inherited, is responsible for 28 walks in 406 plate appearances, and one of those walks are Clevenger’s.

I would have liked Onley to ask about the acquisition of Edwin Jackson.  After signing for 2012 with the Washington Nations at a reasonable rate of $11 million for one year after helping the St. Louis Cardinals to a World Championship, the Cubs rolled up a Brink’s truck to Jackson’s house with $52-million for four years of work.  Jackson finished last year for a very good National League East champion team with a pedestrian 10-11 record.

Why the Cubs would commit that kind of cash to a career .500 pitcher toiling for his eighth team despite being only 29 is a question for the ages.

The Cubs had zero pitching, but why pay Jackson for more than one year when mediocrity is a virtual certainty.

Hoyer sounds like he knows what he’s talking about with Olney, but a quick glance at the Cubs as they play or the stats they compile tells a different story.

Assessing Hoyer as a GM based upon interludes like this with the media is impossible, but whatever his track record with the Cubs reveals, his estimation of Cubs fans intellect is clear.

And who can blame him when fans continue to pay outrageous prices to watch a terrible team that has no chance of improving until 2015 at the earliest.