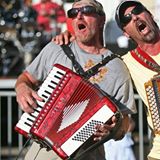 Accordionist Jeff Russell is looking forward to performing tonight at the Rathskeller.

My enjoyment of Polka Boy on a beautiful Friday night as the Rathskeller in Indianapolis is well-documented.  That tradition is one that I honor every single time it happens.

I wrote a little bit about Polka Boy opening the biergarten earlier in the spring, and accordionist Jeff Russell was nice enough to correct some of the apocryphal stories that had circulated about the band -= like that all went to the IU School of Music.

Jeff was generous enough to sit down over a beer at Patrick’s in Zionsville to set me straight.  It was great to meet the guy who sings “Back in Black” as Ethel Merman – always a highlight of the evening – although frightening to kids, as I found out.

Tonight, you can see Indy’s best party band live at the Rathskeller.

To give you some perspective on what you will see and hear tonight, here’s Jeff telling the story of how he came to don a wig to sing the AC/DC classic as one of the great entertainers in Broadway history.