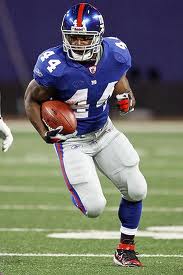 The Indianapolis Colts have signed former NY Giants running back Ahmad Bradshaw to a one-year deal, $1.35M deal, according to ESPN’s Adam Schefter, in an effort to fortify their running game.

Bradshaw is 27, and was released by the Giants after the 2012 season – two years into a four-year deal that guaranteed him $9M of the total $18M.  The Giants will reportedly take a $2.5M cap hit in 2013 for releasing Bradshaw.

The Colts will cross their fingers that Bradshaw is available for the majority of the season as he has played all 16 games only once in his six year career.

The Colts worked hard this offseason to reconfigure its offensive line with the free agent acquisitions of guard Donald Thomas and right tackle Gosder Cherilous, and the drafts of guard Hugh Thornton and center/guard Khaled Homes.  The signing of Bradshaw provides a low risk option at running back that will only cost the team a little more than one million, if Bradshaw’s feet won’t allow him to go full speed throughout the season.

Given the low level of impact running backs available through free agency and the draft, signing Bradshaw was the only option other than pinning all hope on the rushing firm of Ballard, Brown, and Carter.

The nominal value of the deal makes this a legitimate deal with almost no downside for a player who can create problems for a defense when healthy.  If unhealthy, Jim Irsay will be out $1.35M.  That might adversely affect Twitter contest prize levels, but not the ability of the Colts to try to earn a return to the playoffs.