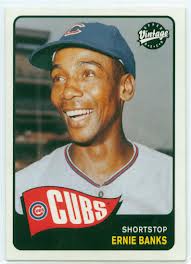 Go ahead, try to find a picture where Ernie Banks isn’t smiling.

I didn’t get to see Ernie Banks play a whole lot.  My cognitive memory developed just as Ernie Banks physical talents finally eroded, but he was the defining figure at that time in Chicago sports.

Banks’ unvarnished enthusiasm for his job was infectious.  To watch a guy play baseball everyday who seemed to understand exactly how lucky he was to be in that position was powerful for kids growing up north of Chicago.

There was always a smile and an autograph for everyone who approached him, and in front of a microphone, Banks always said, “Let’s play two!” as though one game a day wasn’t enough for a 40-year-old man.

I’m sure as his knees failed him and his 19 162-game seasons dragged into August and September, Banks was privately a little less than enthusiastic about sweating his ass off during the shank of a hot day at Wrigley Field, but he never let us know it.

And so there is an entire generation of Chicagoans who learned from Banks that work is to be enjoyed, and that the least we can bring to a day’s effort is a smile.

Future Baseball Hall-of-Famer Greg Maddux tells a good story about a conversation that changed his life.  Then Cubs Manager Tom Trebelhorn told Maddux that he was sick of players looking ahead to what is next – the next day off, the off-season, the next big contract.  He asked Maddux why players couldn’t just be really happy today because they get to play baseball and live a dream.  Maddux didn’t have an answer, but after thinking about what Trebelhorn said, stopped thinking about how much he would enjoy the next off-day and focused on how much fun his life was that day.

When I heard that story, I thought about how smart Banks was to have that figured out from jump street.

Work is only work if we let it be work.  My grandmother would always tell me that turning work into a game was how she got through cleaning the homes of rich republicans.  The men who play games and treat it like work seem especially silly given the example Banks and my grandmother set a half-century ago.

I’ve worked at two places over the past 20 years, and if I have any regret at either place, it’s that I didn’t smile enough – didn’t find a way to enjoy it as much as I should.  It’s hard to look ahead to budget cuts that will mean the end of the road for some members of a staff.  Smiling through that always seemed inappropriate, but did frowning help.  Did being dour make the process easier for those who had to go?  Moping through anything can’t do the fired folks or the remaining staff any good.

Having also been the victim of a cut myself I know that smiling through that unpleasantness is the best tactic.  Being fired is a little like the old saying at closing time of a bar, “You don’t have to go home, but you can’t stay here.”  Being fired doesn’t mean you can’t work – just that you can’t work there anymore.

So, because of the lessons taught to me by so many, and by Ernie Banks – I wake up everyday with a smile, try something new, and make damn sure I enjoy it, whether that’s while working for others or for myself.

Ernie Banks didn’t just make baseball look like fun; he showed us that everything can – and should -bring us joy.

Being happy is always in our control; it’s a choice.  I choose to be happy.  Thanks, Ernie.