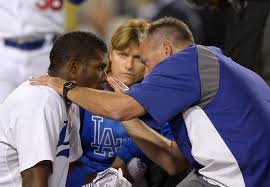 The Dodgers trainer takes a look at Yasiel Puig’s nose after an Ian Kennedy pitch hit him.

There is everything right with drilling a guy in the back as retaliation.  That’s baseball.  Going after a head is the act of a coward, and Arizona Diamondbacks starter Ian Kennedy should pay a significant price for doing that last night in a game against the Los Angeles Dodgers – twice.

Dodgers starter Zach Greinke retaliated appropriately last night to Miguel Montero in the top of the seventh after  Kennedy clipped rookie sensation Yasiel Puig in the nose during the bottom of the sixth.  Benches cleared, but calm heads prevailed.

Then, in the bottom of the seventh, Kennedy hit Greinke near his head.  That’s not baseball.  The head is where bad things happen.  Houston Astros second baseman Dickie Thon’s career was derailed by a pitch to the eye.  Don Zimmer was unconscious for 13 days after being beaned.  Tony Conigliaro might have been a hall of famer if not for taking a fastball to the face.

I’m all for in-game consequences.  Baseball is a game played by men, and men are capable of solving their own problems in an Old Testament way.  But Kennedy crossed a line – twice.

Buying that Kennedy was trying to move Puig off the plate isn’t that tough.  Pitches get away, and Kennedy appeared upset after Puig went down.  The second pitch that nearly hit Greinke in the head left no doubt that baseball needs to issue its own corrective measure against a rogue pitcher who went headhunting.

The brawl was a ridiculous exercise in posturing, as is almost always the case.  I saw nothing that resembled a punch, other than Puig banging on a Diamondbacks player’s back.  Diamondbacks manager Kirk Gibson and Dodger hitting coach Mark McGwire squared off and yelled at each other before McGwire and Diamondbacks coach Matt Williams danced a bit, but the fight that might have defined baseball fights for a generation never got untracked.

I don’t want baseball to go all UFC, but watching Gibson and McGwire go at it would be a singularly fantastic spectacle.

But back to baseball.

You hit mine, and I hit yours is a time tested method of problem solving, but heads are sacred.

Here’s the video of the Kennedy beanball to Greinke and the resulting fight, accompanied by descriptions by the great Vin Scully:

4 thoughts on “Beanball Wars – Dodgers and Diamondbacks Square Off; Ian Kennedy Should Be Suspended”