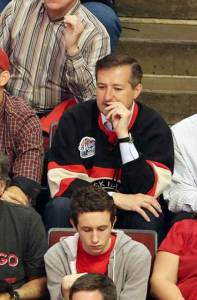 Ricketts watches the Hawks win wearing a jersey over his business shirt.

Okay, so this photo gallery has only two pictures, but that’s alright.  A picture is worth 1,000 words, so these two shots of Chicago Cubs head fan/owner are worth more than three times the words in this post.

I’m tired of Ricketts act, and it is an act.  If he doesn’t want to act like the descendant of money that he is, then give away the cash and do it for real.

Ricketts’ life is no more similar to the average Chicago sports fan than the educational experience for a student a Lake Forest High School is to a kid at Chicago Simeon.

The only tie between Ricketts and the decreasing crowds at Wrigley Field is that all wonder why they invested so heavily in the Cubs.

And now Ricketts has taken to wearing a Blackhawks jersey to the United Center for the Stanley Cup Finals.  It’s part of his schtick to earn relatability points with fans, as though he could ever pass as an attitudinal heir of former White Sox owner Bill Veeck.

Veeck never wore a jersey, and always told the truth, which makes Ricketts 0-2 – just a bad actor who’s dad made enough cash to allow him to buy the team he rooted for as a kid.

That doesn’t mean he’s some schlub suckling at his daddy’s teat.  He’s not.  Sonny Ricketts is a smart guy who acts on terrible image management advice:

I can’t tell whether this is idiotic counsel or a cruel hoax!

At what point does this idiocy stop for Ricketts – a guy with an education to kill for, wealth to pine for, and intellect that shames the rabble ticket buyers he woos.

The Cubs are currently a terrible baseball team, and they likely will be for another two years.  Ricketts 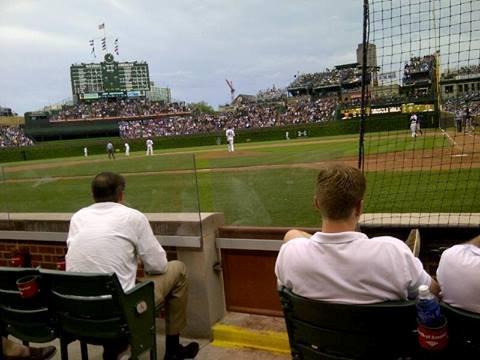 Ricketts sits among empty box seats assessing the investment that might just pay off for him in 2017.

won’t tell Cubs fans that, but they have eyes.  Fans are staying away in larger and larger numbers as they see the endless string of discipline bereft at-bats, and in a bizarre strategy Ricketts is trying to sell himself as part of the Cubs brand.

When Ricketts picks up a bat and takes a slider low and away rather than waving pitifully at it for strike three, Cubs fans will view him as a reason to dig deeply into their pockets for the bank needed to walk through the turnstiles at Clark and Addison.

While fans wait for Javier Baez, Albert Almora, and Jorge Soler to develop the lack of strike zone knowledge to qualify for a chance to strikeout with men on base at Wrigley, they will have to settle for the man who looks less at home in a jersey than the average fan does in a tux.