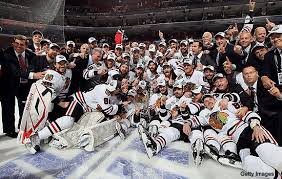 Of all these happy Hawks, I would recognize Toews and Kane on the street but none others, and that’s a big problem with the NHL.

Two sports with their championship series that occur almost simultaneously.  One thrives, and the other struggles.  One has stars, the other has players with similar talents who minus their numbers appear identical.

The differences between the NBA and NHL remind me of the difference between NASCAR and IndyCar.  When I watched the Iowa Corn 250 Sunday afternoon, the racing was thrilling.  The cars were so fact and nimble.  NASCAR races are slow and plodding, yet many times more people watch NASCAR than IndyCar.

Why?  Recognition, and our desire to know what and who we see on our TVs.

The climactic Game Six last night between the Chicago Blackhawks and Boston Bruins was incredible.  The final two minutes of the game were ‘can’t sit down’ exciting for fans of both teams.  The last two minutes of virtually every NBA game are filled with so many interruptions that any momentum is thwarted.

The NBA hasn’t always dominated the NHL in popularity.  Back in the 1970s, hockey was a bigger draw than basketball.  So what happened?

The management of the NBA hasn’t been without blemishes, but David Stern has been smart enough to ride the wave of popularity created by stars like Jordan, Bird, Magic, Julius Erving, Isiah Thomas, Charles Barkley, and now LeBron James, Carmelo Anthony, Dwyane Wade, and Kobe Bryant.

Basketball is a more TV friendly event than hockey because the orange ball is significantly larger than the little black puck.  HDTV has helped people identify the puck without the nutty red or blue trail that Fox tried to force on viewers, but it’s still slightly more difficult to see.

There is hope for hockey because the games can be incredibly exciting, and NBC does a hell of a good job in producing its Stanley Cup Finals telecasts (is there a better play-by-play guy working today in any sport – minus Vin Scully – than Doc Emrick?), which are the only portals to the sport for the marginal/former fans, but hockey needs visionary leadership that will put the fans first.

The one piece of the NHL that the NBA could afford to adopt is the lack of timeouts down the stretch of a game.  The last 1:30 of a game can take as long as 15 minutes.  There are practical advantages to the timeouts in the NBA – like the windows for commercial content that they allow, and the perversion of the officials moving the ball 3/4 of the way up the court to make under three seconds left in the game enough time to change the outcome.

I enjoyed watching the Hawks win last night – jumping up, pumping my fist, and yelling loudly enough that my wife came running to see what the hell was going on – but if Duncan Keith knocked on my front door this morning, I would probably think he was a Jehovah’s Witness.  If Luol Deng or Paul George came by, I would easily recognize either.