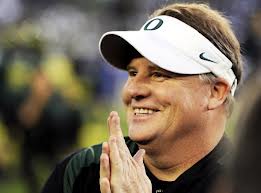 “Dear Lord, Please get me another gig before the hammer falls like a feather on the Oregon Football program.” Prayer answered.

It would be great if people who cheat weren’t rewarded.  Bankers ruin the economy, and go sailing on their 60-foot Fountaine-Pajot Eleuthera clippers.  CEOs burn companies to the ground, and receive an obscene bonus that could feed 1,000 families for a decade.  And college football coaches cheat to recruit talent, and run to the NFL for big bucks before the NCAA can penalize them.

Such is the case for former Oregon Ducks coach Chip Kelly, who can’t coach a college team for the next 18 months, which will make life difficult for him as the head coach of the Philadelphia Eagles in no way at all.

That didn’t keep Kelly from giggling as he issued a statement of apology:

“Now that the NCAA has concluded their investigation and penalized the University of Oregon and its football program, I want to apologize to the University of Oregon, all of its current and former players and their fans.  I accept my share of responsibility for the actions that led to the penalties. As I have I stated before, the NCAA investigation and subsequent ruling had no impact on my decision to leave Oregon for Philadelphia.”

The fact that Kelly would lose your job at Oregon had nothing to do with his decision to leave?  The very least this boob might have done is throw at least one truth in his apology.  He could have earned points by saying, “What a joke!  Yeah I cheated, and why wouldn’t I?  It worked out great for me!”

Kelly is contrite in the same way Clinton regretted sticking cigars into an intern.  To blatantly cheat, get caught, and than receive a pat on the back is an insult to collegiate athletics, and all that is supposed to be good and just in this world.

Don’t waste your time looking too hard for justice in this world, because unless you are at the bottom of the economic food chain, it doesn’t exist.

America has decided that it should steal the attitude of celebrated whack job, the late owner of the Oakland Raiders, Al Davis, and “Just win, baby!”  Oregon won as a result of a culture where cheating was the norm.  Kelly was offered the chance to coach the Eagles because he won through cheating, and by the time the embattled and ineffective disciplinary arm of the NCAA concluded its two-year investigation, Kelly was no longer available to take his medicine.

We’ve entered a realm in college athletics where it no longer makes any sense not to cheat.  Coaches used to laugh, “If you ain’t cheatin’, you ain’t trying!”  It’s not funny anymore.

The NCAA has done such a pathetic job of enforcing its idiotic rule book that it has created a culture where cheating is not only accepted, it’s rewarded.  The punishment the NCAA gift-wrapped for Oregon was so soft that programs no longer need to fear being caught, as if they ever did.

It’s a tragedy that student-athletes are used to make millions for others while they go unpaid, but then to heap on to the pile the moral debauchery they are exposed to as part of their education adds insult to that injury.

Doing the right thing used to be a priority in our society, and it still can be, but all disincentive for doing the wrong thing has been removed from collegiate athletics.

I’m sure as Kelly heard the penalty for his former employer and learned of the 18-month show-cause order that would keep him from coaching in college football if he didn’t already have a better job, there was a brief moment where he reflected on his actions.  Then, he probably laughed while penning his statement.

What a shame.  Yesterday, was the day the NCAA finally threw in the towel.