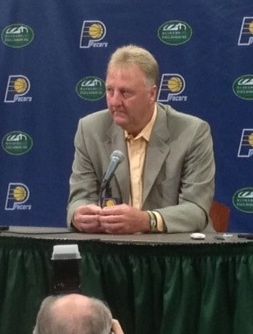 With all the crap that passes as wisdom during press conferences in sports today, it’s a pleasure to watch Indiana Pacers Re-President Larry Bird tell the truth for awhile, even when he divulges very little.

When Bird is asked a question, he answers honestly, even when he doesn’t want to answer the question.  There were more than a couple, “I don’t want to talk about that” responses today.

Among the questions that went unanswered were whether Bird had surgery during his year hiatus to relieve whatever health issue that made his sabbatical necessary, and how long he plans to serve as president of basketball operations.  He did say that he plans to work for “Herbie” Simon for the duration of his contract, but wouldn’t say how long a deal that is.

What he did say is that he has no plans to trade Danny Granger, which he would of course say.  Why would the head of a franchise tip his hand about the disposition of a $14M player with knee issues heading into the last year of his contract.  The way Bird said it though led me to believe that Bird is committed to bringing Granger back as a contributor if he’s healthy.

He also expressed pride in watching the Pacers this year, and singled out Lance Stephenson for the strides he has taken on and off the floor.  Bird drew some laughs, particularly his own, as he said that if Reggie Miller rebounded his position like Stephenson did last year, he would have been a “hall of hall of famer.”

Bird was also pretty clear that his only input during tonight’s draft would come if the Pacers engage in trade talks.  He said he has not evaluated the potential draftees, but would have something to say about deals for current NBA talent.

As to why Bird came back, he said he wasn’t bored, but does welcome the challenge of taking the Pacers to his goal, which he never articulated as a championship, but left little doubt.

The primary goal this offseason will be signing power forward David West, and then he plans to build a bench that can maintain a lead, or even win a game when the starters falter.  That certainly isn’t the case with the roster as it’s comprised today.  Bird knows it just like the fans do.

One little behind the curtain issue is the relentless politeness of the media.  They wait their turn to ask questions very patiently, and only ask good questions.  That separates the media in Indy from the media everywhere else.  There is always some idiot willing to ask moronic questions, but here the group behaves like adults.  As interesting as Bird’s honesty can be, the media’s lack of willingness to act like morons took a toll on the entertainment quotient of the event.

Whether Bird’s return is good or bad for the Pacers will be determined by whether they take steps forward or back next season and beyond, but there is no doubt that it means getting honest (if not entirely forthcoming) answers to some good questions.