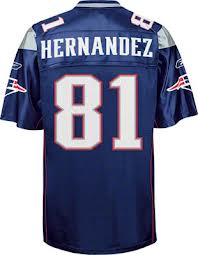 File this under “Duh.”  The New England Patriots are offering fans a chance to come to the Patriots Pro Shop at Gillette Stadium and exchange their Hernandez jerseys for the jersey of a player not charged with murder of a comparable value.

The only mistake is that the Patriots aren’t going nearly far enough.  Every single Hernandez jersey that remains on the backs of fans, kids, thugs, and punks is a walking reminder that the NFL is not populated with choirboys.

That the Patriots are limiting the exchange to next weekend is testimony to the fact that people don’t think clearly during a crisis.  The exchange offer should exist in perpetuity because walking billboards touting the former employment of a man charged with one murder – and looking at two more charges straight in the eye need to be liquidated.

The offer is explained by New England Patriots spokesperson Stacey James, “We know that children love wearing their Patriots jerseys, but may not understand why parents don’t want them wearing their Hernandez jerseys anymore.  We hope this opportunity to exchange those jerseys at the Patriots ProShop for another player’s jersey will be well received by parents.”

There are several restrictions, which shows the Patriots are hard at work over thinking this jersey amnesty program.  If profiteers want to run around New England buying up jerseys, so they can exchange 100s of them for Tom Brady jerseys, that should be the same thing the Patriots would do if they had both the staff and brains to do it.  Here are the rules:

A herd of emissaries gathering links between gangland style murders and the Patriots brand is a good thing, and the cost of the jerseys as a reward for the goodwill profiteers would be the best money the Patriots ever spent.

But the Patriots would rather limit their paltry financial exposure by hosting the exchange during a very tight window at a single location.