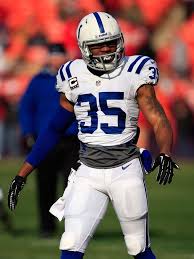 Guns can stop arguments, cause death/injury, and get you arrested.  For Colts special teams captain Joe Lefeged, it was the latter early yesterday in Washington D.C., and the question will be asked as it is every time an NFL player is arrested, what the hell is wrong with these guys?

It’s not hard to follow the law to the extent that you don’t wind up behind bars, but more and more NFL players are getting arrested, and it seems that an inordinate amount of the arrests involve a handgun.

I’m not sure what good can come from having a gun under the front seat of a car, but they must do something positive for NFL players because most seem to have one.  In Lefeged’s case it is alleged to be unregistered – hence the arrest for carrying a firearm unregistered in Washington DC, possessing unregistered ammunition, presence of a firearm in a motor vehicle, and possession of an open container of alcohol.

The car was reportedly driving erratically, prompting police efforts to stop the car.  A chase ensued.  The three guys in the car bolted, and police discovered why Lefeged plays defense as he was one of the two that were caught.

With the rash of negative things happening to NFL players as they carry guns, the good that causes them to continue to covet weaponry must be quite profound, although I have no idea what it is.  Maybe the violence/crime that is stopped because they pack heat goes unreported.  I don’t know.

There is clarity though that NFL players are operating outside of the law with out of whack regularity.  Players are being arrested at almost four times the rate of men outside professional football, and that’s a problem because getting arrested isn’t easy.

The laws of the land aren’t difficult to understand, although knowing that a gun carried by a person in Washington must be registered there might escape visitors.  But it’s not like trying to figure out the NCAA rulebook.  People walking the streets don’t need a compliance office to keep them out of prison.

Lefeged is being held without bail until another hearing on July 2nd, and teams must be sweating bullets (no pun intended) as they hope the important pieces of their roster puzzles find a way to keep their noses clean until camp starts in four weeks.

In the meantime, rich + popular + violent + immature will likely equal more NFL players doing stupid things, running from the police, testing positive for banned substances, and generally making a mess of the off season.

The culture of NFL players is different from all fans, and the culture many of these players grew up in is different than most, so understanding why handguns and mayhem is impossible for us, but the judicial system doesn’t welcome socioeconomic exceptions during sentencing.

What happens with Lefeged is anyone’s guess, but at sometime the consequences of breaking the law must outweigh the advantages of the illegal acts, or behavior will never change.

That consequence can either come from law enforcement or from NFL Commissioner Roger Goodell, who at some point is going to tire of the monotonous routine of players acting like such idiots, police cannot ignore them.