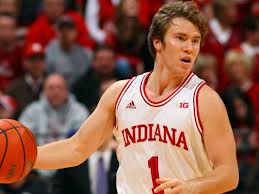 Jordan was a guest today on “Ahead of the Curve”, and there is no way to not feel good about the Indiana University Basketball program when talking to him.  He is exceptionally earnest, and very trusting in his way of playing basketball and living life.

And why wouldn’t he be.  He led his Bloomington South High School team to an Indiana 4A State Championship while earning Mr. Basketball honors, and then went to his hometown university with confidence that he could help change the culture and turn the program around.

While wearing #1 at IU, Hulls teams won 10 tyhen 12 then 27, and finally 29.  The Hoosiers climbed the ladder in the Big Ten from ninth during Hulls freshman year to winning the conference title outright – the first title in 20 years.

Hulls knows who he is, what he does, and what he can do to help another team as a professional.

He will undoubtedly be an Indiana University Athletic Hall of Fame, an Indiana Basketball Hall of Famer, and it wouldn’t surprise me if when it’s all said and done he finds another way to help the Hoosiers win as a coach.

Talking to him, as always, was a pleasure.  If sports parents need an example for kids to follow – someone who knows cold that hard work yields a positive result, Jordan Hulls is the guy.

Listen to the interview that aired today on “Ahead of the Curve”, which airs every Saturday on 1070 the Fan from 11a-1p.  Indiana University alums and fans will be as proud of Hulls as any who has ever played basketball as a Hoosier.