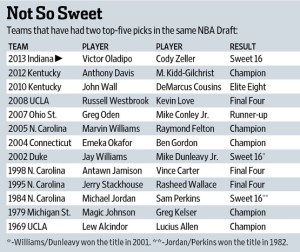 “Len” is a friend of mine who emails anti-Tom Crean messages to me with regularity.  Having worked with Crean twice per year while toiling for a competing Big East basketball program, he was not – and is not – a fan.

So when he sent a link to a piece posted today on the Wall Street Journal’s “The Count” column. I opened it knowing that “Len” would be trying to continue the ongoing work of making his case against Crean’s continued employment.  The subject line removed all guesswork, “Fire Crean Before It’s Too Late.”

I wasn’t surprised by what was in the column, but was a little shocked that it would appear in the Wall Street Journal.  Either the author has a similarly skewed view of Crean, or the Journal believes that their is a bounty of Kelley School of Business grads around the country who will lap up any and all IU Basketball perspective, including an arcane occurrence that makes the 2012-2013 Indiana team the biggest underachiever in college basketball history, according to the WSJ.

The graphic from the WSJ above shows all 13 teams in the history of college basketball to have two top five players drafted in the NBA Draft and how they finished in that year’s NCAA Tourney.  Only five won the tournament, one was the runner-up, three more lost in the Final Four, one lost in the Elite Eight, and the other three (IU in 2013 among them) lost in the Sweet Sixteen.

The two players who were drafted in the top five for the other two teams to lose in the Sweet Sixteen won a different tournament at some point during their careers.

I like a man willing to take a passionate stand against a successful coach for purely personal reasons as much as the next guy – more probably.  And I have liked this person very much since meeting him as a freshman after being told that his name was Larry.  I greeted him on the way to the Briscoe Quad’s cafeteria, “Hey, Larry!”  He said clearly and loudly, “That’s – not – my – name!”  It was friendship at first sight.

But in this limited instance, “Len” is wrong.  Here are five great reasons off the top of my head as to why (if I gave it much thought, I could come up with a screed rivaling the length of Martin Luther’s grievances against the Catholic Church):

There is no doubt a disconnect exists between the IU grads who matriculated (I haven’t matriculated in years!) during the Bob Knight era.  The offense Indiana runs looks nothing like the rhythmic and effective motion offense of Knight’s.  The relentless ball screens make some of the older IU fans wince.

A personal disconnect is there on some level too, but the work IU basketball players do in the classroom and on the court is exemplary, and that’s the criteria by which Crean should be judged.

It’s impossible for a coach to win NCAA Tournaments without some luck, and Indiana (with a bad early pairing against eventual champ Kentucky in 2012, and one poor performance against Syracuse) haven’t had much.

There is certainly room to be critical of Crean as it appears he tries to coach Indiana players into peaking physically and mentally through the entire season.  The Hoosiers appeared to run out of gas late last season – notably in the second half against Ohio State on March 5th and beyond.  Slowing feet late in the season makes winning tough.  I would love to see Crean back off the minutes of his starters during the pre-Big Ten season, and clear the bench a little earlier during blowouts, but that’s Monday morning quarterbacking after seeing the result of the extended minutes.

Crean has gotten to the pinnacle of his profession through relentless hard work.  To expect a coach with that professional background to back off the throttle at any point is not reasonable.

No coach is without warts, but Crean’s IU program is clean, graduates all players, wins at a high level, and recruits with Duke, Kentucky, and Kansas.  That makes a great and correct answer to the question – who should coach basketball at Indiana University?

I love the emails, but Crean has succeeded where few others might have.

10 thoughts on “Indiana University Basketball in 2012-2013 Was Historic Underachiever, According to WSJ”