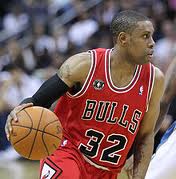 Reports are popping up everywhere that C.J. Watson has agreed to sign with the Indiana Pacers to enhance their roster as a backup point guard.

Watson, 29, is one of the very rare characters in the league to literally work his way up from nothing to find prosperity in the NBA.  He was not drafted, but found a way into two 10-day contracts with the Golden State Warriors in 2007-2008 and made the most of those opportunities to earn more than $9-million to this point in his career after three seasons with the Warriors, two with the Bulls, and last year with the Brooklyn Nets.

There are eight excellent reasons why the Pacers did the right thing in signing Watson:

Watson tweeted at 1:06p today, “Keep up with the pace!!!!” followed by several emoticons that I can’t decipher.  That might be some kind of code that he’s coming to Indy, or an admonishment to slow drivers.

It seems Watson understands social media, having accumulated 346,137 followers, but he had a huge advantage by playing in three of the top five media markets in America (SF, Chicago, NYC).  He also appears to be another focused player who spent four years in college (Tennessee).

The deal won’t become official until July 10th because of a silly rule requiring a ten day moratorium on signings.

In other Pacers news, the team announced this afternoon that Nate McMillan has agreed to become the associate head coach, filling the role of departed assistant Brian Shaw, who left to become the head coach of the Denver Nuggets.

The roster for the Pacers summer league entry was also released this afternoon, and two names were interesting.  IU’s Christian Watford will be on the squad as he tries to earn a spot in training camp.  Also, former Minnesota Timberwolves first round selection (6th overall) Jonny Flynn will be with the Blue and Gold.  Flynn is only 24, and has a lot of basketball ahead of him somewhere.

Here’s a short video clip of Watson talking about his toughest moments in basketball: