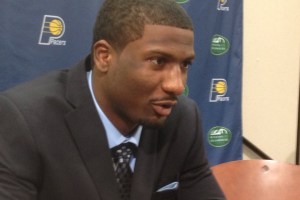 First round draft pick Solomon Hill talks about coming to the Pacers.

Solomon Hill is the kind of draftee that you feel great about introducing to the media.  He is not just articulate – which so often is code for an African-American kid who speaks in the way the white media appreciates – he has a wisdom that will compel fans to believe that He is going to get better.

The vibe is not altogether different from Roy Hibbert when he came to the Pacers.  Hibbert appeared to be a genuine young man willing to devote himself to becoming the best he can be.  Ditto Hill.

In the interview below, Hill talk about his plans for the summer league, whether he plans to make Indianapolis his permanent home, and about how excited his Dad was to meet Larry Bird.

3 thoughts on “Solomon Hill Serious and Focused During Introductory Presser”