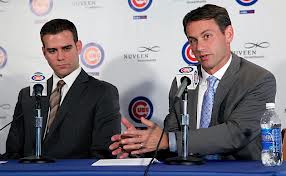 Cubs President Theo Epstein and GM Jed Hoyer are the stars of the series of trades the Cubs made today, and there is no telling yet what players will be gotten with the gains.

This is the kind of writing that makes my brain ache.  The Cubs traded some guys, including Scott Feldman, Steve Clevenger, and Carlos Marmol to a variety of team for a few other guys, plus some very important International Bonus Pool allotments that total in the neighborhood of $1 million.

You see, in order to curb unchecked spending on international prospects, and set the stage for an international draft as soon as next year, Major League Baseball instituted a bonus pool slotting system that decreases from slot to slot in inverse order of how teams finished during the previous year.

The Cubs had the second worst record in baseball, so they have the second most money.  To delve beyond that will make my head hurt worse than it already does, and the odd are you don’t care.  (If you do, here’s the link to an explanation that is detailed, complete, and as difficult to understand as Angel Hernandez’ strike zone.)

The simple answer is that there is a limited amount of money that can be spent on bonuses as teams bid against each other for the services of some of the best Latin players.  The Cubs had roughly $4.5 million before today’s deals, while the team with the best record last season – Washington – has roughly $1.8 million.

Today’s trade of spare parts for other spare parts yielded an extra million or so that they will use to be the big wheel in the Dominican Republic as they battle the rest of the teams for talent.

The key is the evaluatory process that Cubs President Theo Epstein and GM Jed Hoyer.  If the boys are able to use this bounty to attract outstanding talent, these deals could be a huge part of the rebuilding process that so far has reaped only misery and an annual binging and purging of players.

Here is a breakdown of the fellas who were traded for other fellas, who may be traded yet themselves before the deadline at the end of the month:

Who are Arrieta, Strop, and Guerrier?  It doesn’t matter.  They are pitchers who have never done too much, and aren’t likely to do much more.  Torreyes is a 20-year-old middle infielder who moved up this year to the Cubs double-A affiliate, where he hit .260 with two home runs and four steals.

The Cubs signed the third ranked international player of this class, Venezuelan shortstop Gleyber Torres today for $1.7 million, and are front runners to get Dominican outfielder Eloy Jimenez.  The cash received today was acquired to help make that happen.

These trades were about the players who can be purchased with international bonus cash.  Anyone who has been to an auction knows that the great swag goes to the man with the deepest pockets.  Right now, that’s the Cubs thanks to their terrible 2012 record and these trades.