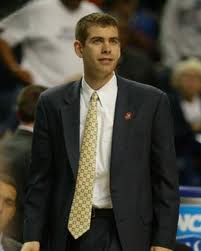 There was no doubt that Brad Stevens would eventually leave Butler University for a place that represented a bigger challenge, offered significantly more money, and puts his name on a much bigger marquee.  Butler’s basketball program is a wonderful place for a coach to ply his trade, but what else was there to do at Butler?

Brad took Butler to consecutive berths in the NCAA Championship game, brought the Bulldogs to a level where Hinkle Fieldhouse is undergoing a significant upgrade, and marshaled it from the Horizon League to the Atlantic 10 to the Big East.  All that happened since he took the job in 2007.

To take Butler from feel-good little engine that could program to where its incredible success was expected, while remaining true to his moral compass makes this one of the greatest jobs done by a coach in the history of sport.

And he is one of the nicest guys ever.

When Brad was an assistant for Butler, he successfully recruited two kids who played for the same summer team as my son.  He outworked every coach who targeted Zach Hahn and Matt Howard by being at every game we played during sanctioned tournaments.

He was always friendly within the rules, and I think every parent of a kid on that team wished that Butler was on them because of Brad.  There was something strange about the guy.  No matter how many games our kids played Brad always watched with interest – never bored, always engaged.

Brad and Dane Fife, who at that point was the head coach at IPFW, outworked everyone in recruiting our team.

The story I like best about Brad is one that he denies, but when my son was a freshman at Loyola he didn’t play much.  When Loyola came home to Indianapolis to play Butler at Hinkle – a place Ryan had gone to camp and played at throughout his youth, Loyola’s coach called for Ryan to report to the scorer’s table with 1:30 to play in a 14-point game.

The possessions went back and forth, and it was clear that the game wouldn’t be stopped.  Ryan was going to have to sit there like a lump until the buzzer and then be in a great position at the head of the line to shake hands with the victorious Bulldogs.

Brad called timeout with :42 seconds left.  Ryan went into the game, ran around for a minute, and while it wasn’t what he hoped for in that game, it beat sitting.  What was excellent is that Brad had no reason to call the timeout other than to get Ryan into the game.

I talked to him about it after Hinkle had cleared, and he claimed that he yelled something that sounded a little like timeout, and the referee misunderstood.  I didn’t buy it then, and I still think he is just that nice a guy.

Brad Stevens is, above all else, a good man.  Find a player who spent time playing for Brad, and they are effusive with praise for him – and not in the clumsy way some kids bring false praise, but genuinely and emotionally proud to have learned from him.

How much did Stevens care about the well-rounded experience his student-athletes received?  Practice everyday started at 6:00 a.m., so players never missed class no matter what their majors were.  There are plenty of programs who steer kids away from majors because of the timing of classes.

You want to know about the Butler Way and how it evolved under Stevens, spend 15 minutes with Matt Howard.  There are a lot of programs that passed on Matt Howard, but Brad endured game after game of summer ball to evaluate him and understand that what others perceived as awkward physicality was actually a huge asset, and that his affability masked the heart of a tenacious competitor.

Without Matt, Butler doesn’t go to championship games, but Brad earned his loyalty by displaying his own at 8:00 a.m. and 10:30 p.m. during games only he and Fife watched.

Zach Hahn is going to be a great basketball coach because he is a bulldog in every sense of the word, and because he learned under Brad for four years.  Same with Ronald Nored and anyone else paying attention as Brad both learned and taught at Butler.

Boston made a great move – a leap of faith – and Brad is going to reward them with patience, decency, a willingness to learn, and a passion to teach.

During a time when the Boston media is riveted by an accused murderous tight end with a hole in his soul, it’s great that a truly good guy is going to get their attention during a press conference on Friday.

It sad that there is a generation of kids whose spirits won’t be shaped by one of the best mentors in college basketball, but it’s wonderful that a dream of Brad’s has come true.

3 thoughts on “Brad Stevens Is a Credit to Coaching, Butler, and Indianapolis”