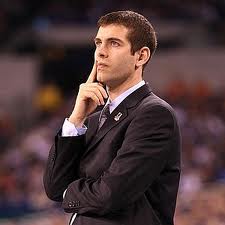 Impossible.  Unbelievable.  I was about to pick up the phone to call Butler to see if Brad Stevens could come on “Ahead of the Cuve” Saturday, and suddenly reports are everywhere on Twitter that he will be the next head coach of the Boston Celtics.

There are many moments when I can remember seeing a media report so extraordinary that I have to refocus my eyes before finally yelling, “Holy S**t!”, but this was one of them.

Celtics president Danny Ainge explained the shocking move on espy.com, “Brad and I share a lot of the same values.  Though he is young, I see Brad as a great leader who leads with impeccable character and a strong work ethic. His teams always play hard and execute on both ends of the court. Brad is a coach who has already enjoyed lots of success, and I look forward to working with him towards Banner 18.”

Stevens told ESPN, “Our family is thrilled for the opportunity given to us by the leadership of the Boston Celtics, but it is emotional to leave a place that we have called home for the past 13 years,”

Butler will more forward as they have after the loss of Barry Collier, Thad Matta, and Todd Lickliter.  Leaving worked out well for Matta but terribly for Lickliter, whose tenure at Iowa was short.  He is now the head coach at Marion University in Indianapolis while Matta is making big bucks at Ohio State.

The rumors always persisted that the only two jobs Stevens would leave for are in Bloomington and Durham, NC.

All that talk is now moot.

Stevens walks into a job with reasonably low expectations, as the Celtics have unraveled their core and are building for three years down the road.

He’s one of the nicest guys in the history of coaching, but he not a pushover for knuckleheads like point guard Rajon Rondo.