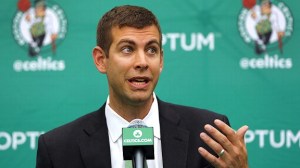 How do you know that Brad Stevens is doing what he believes to be the right thing for his team? His office light is on.

Brad Stevens is being underestimated by Celtics fans who are worried that the former Butler coach might not be ready to lead one of the most storied franchises in American sports.

Boston sports fans are a clever and demanding group, so they will learn along with the players and front office staff what team president Danny Ainge already knows – Stevens is a basketball savant and effective leader, regardless of the age or business of those he leads.

If Brad Stevens was the team leader of a group of astronauts, that group would overachieve in space.  If he coached a little league team, the kids would have a great time learning from him.  If he managed an H&R Block, people would get the best refund possible very quickly.

Success is something that operations associated with Stevens will always experience because he earns respect through consistent behavior, and because he never puts his own priorities ahead of goals shared by his group.  He doesn’t allow selfishness to invade his group either.

People who don’t understand leadership and the behavior of athletes believe that his intolerance of selfishness will be his undoing as the head coach in the NBA – where selfishness appears to be a way of life.

What they don’t understand is that while athletes can gravitate toward their own agenda during a leadership vacuum, as a rule, they enjoy structure where doing what is best for the unit is an expectation enforced with zeal.

That’s what great leaders do, and Stevens is a great leader.  People have expressed doubt that Stevens can win over the mercurial Rajon Rondo, who has built a reputation as a talented but difficult player.  Most often, difficulties spring from poor communication from a coach or manager, or a leader who can’t be trusted to operate in the best interest of the team.

Phil Jackson never put himself ahead of the team as coach for the Chicago Bulls, and managed very nicely in harnessing the behaviorally challenged Dennis Rodman.  When the Bulls signed Rodman, there was a lot of squawking about how he and Jackson would butt heads and cause a calamity for the championship minded Bulls.

That didn’t happen.  In Fact, the opposite happened.  Rodman came to trust Jackson as a mentor, and was an integral part of a second set of three straight championships.

Stevens has not trouble with wither.  What Ainge sees in Stevens is a guy who will be all about reinforcing the positive collective behaviors of his team, will put them in the best position to succeed in possession after possession, and who will outwork everyone in the organization.

The San Antonio Spurs provide an excellent example of how a culture combined with selfless attitude can result in consistent winning, and I would expect a similar trek for Boston once Ainge fills the roster with those who are talented enough to win.

There is a reason that Stevens is revered in Indiana like no coach since Bob Knight, and that reason also explains why he will thrive in Boston; he can be trusted by players, fans, the media, the Celtics interns and cleaning staff to be forthright, respectful, and selfless.

Consistent behavior builds trust and trust yields love.  Brad is loved in Indiana after only six years because he is a man of principle who walks the walk.  That makes him an anomaly in sports, particularly in college basketball where users tend to congregate.

Leadership is about the little things that get done when no one watches.  During good times and bad, (and there hasn’t been a lot of bad at Butler in the last six seasons with Stevens at the helm), Stevens makes decisions that help his team move forward.

Celtics fans will revere Stevens just as Hoosiers do, but like all relationships, it will take time.