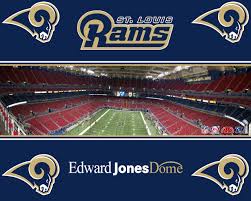 he St. Louis Convention and Visitors Commission told the Rams in a letter dated July 2 that it has decided not to spend $700 million to upgrade the Edward Jones Dome.  The move was expected by the Rams and everyone else in town, and mandated by the current lease between the Rams and the CVC.

The CVC doesn’t have $700M, and has no way to get it, so this was procedural and will have no effect on whether or not the Rams move to Los Angeles or anywhere else.

The Rams hierarchy has maintained for months that the team is quite comfortable moving forward without a lease, and the CVC refusing to abide by the Rams lease to maintain the Jones Dome as a top eight facility in the NFL will cause the lease to lapse after the 2014 season.  Right now, it’s closer to the bottom eight than the top eight.

Moving past this hurdle will allow negotiations to begin in earnest with the state and city to get something done without the contractually mandated meddling of the CVC.

Stan Kroenke, governor Jay Nixon, and Francis Slay are going to have to sit down to see what can be done to move this project forward if it’s a priority for Kroenke, and only if Kroenke and Nixon feel compelled to welcome Slay.  No law that the Rams can’t move to South County or Earth City.

The Rams aren’t going anywhere because there is nowhere to go to.  Los Angeles is in no position to welcome a team, and London is not viable for the Rams.

It’s a shame that something hasn’t been worked out to this point because a positive resolution would be a win for both sides.  St. Louisans can drive to Indianapolis to see what a new stadium and all the associated events can mean to a metropolitan area.  Indy was in a similar position ten years ago with reports of Colts owner Jim Irsay standing up at an NFL owners meeting, and asking, “What do I have to do to move my team to Los Angeles.”

Cooler heads prevailed.  Emmis CEO brokered the peace between Irsay and then Indianapolis Mayor Bart Peterson, and Lucas Oil Stadium was built.  Indy got a Super Bowl during one of the most temperate early February weeks in the city’s 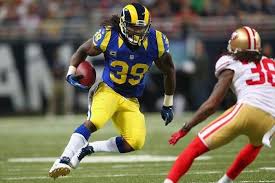 These unis are much cooler than the gold and navy.

history, and all of a sudden, more and more restaurants opened.

Had the heads of city and state governments allowed the Colts to walk, the downtown would have regressed to its India-no-place worst of 20 years ago.

St. Louis needs to understand and embrace its imperfections and develop a workable plan for a downtown revitalization, with sports at its hub.

The Rams aren’t going anywhere, but that doesn’t mitigate or excuse stonewalling partial public funding of a new home for the Rams.

If St. Louis and Missouri refuse to evolve forward, there are plenty of cities willing to, and whether or not the Rams are in St. Louis, that pride will cost the city a very bright future.

Nixon, Slay, and Kroenke should convene to get a new house for the fans, and if the Rams want to make me happy, adopt the alternate jerseys (see right) as the primaries.  The gold and navy are way too dark – especially in the natural-light-free Jones Dome

40 thoughts on “St. Louis Rams Are Not Going Anyplace; CVC Move Was Expected and Not Harmful”