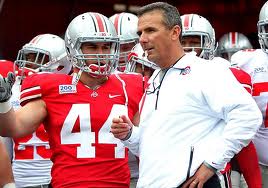 There is no doubting Urban Meyer’s ability to win, but his text has opened the door to assess his ability to mentor.

There are times and ways to communicate with the media and Ohio State football coach Urban Meyer chose the wrong time and manner to speak up in the aftermath of the murder arrest of New England Patriots tight end Aaron Hernandez, one of his former players at the University of Florida.

Now, media outlets like the New York Times are digging into arrest records of Meyers teams at Florida to show a pattern of disciplinary lenience to contradict Meyer’s claim in a text sent to reporter Tim May of the Columbus Dispatch.

Meyer’s lone statement about Hernandez and his culpability in the murders due to his allowance of questionable behavior in Gainesville reads, “Relating or blaming these serious charges to the University of Florida, myself or our staff is wrong and irresponsible.  Our staff, myself and our families worked very hard to mentor and guide him,”

That may or may not be true, but what is irrefutable is that Meyer was wrong to indulge his impulse to defend himself, his staff, and his former employer.  There would be a time when he would likely need to speak about the Hernandez he coached, but this was not it, and texting it makes Meyer appear less than brave in choosing his method.

Not allowing yourself to be cross examined in a face-to-face interview fosters a public belief that there is more to the story than Meyer is willing to share.

Face-to-face and forthcoming – good media relations.  Refusing to answer any and all questions in person would not be as good.  Trying to control the media and manipulate the message through a text – really not good, as it’s the kind of response that prompts the NY Times to turn Greg Bishop loose to find what Meyer might be hiding.

Meyer would have been wise to monitor Patriots coach Bill Belichick.  If he ever opens his mouth to reveal anything of substance regarding his former employee, it would be stunning.

Bishop’s report isn’t especially damning, but the revelation that of 121 players listed on the 2008 Gators roster, 41 have been arrested either while at Florida or after, isn’t positive.

There are a lot of people who get arrested during their college years.  Of the friends I have with whom I spent time at Indiana University, at least one third were arrested at one point or another.  As with the Florida players, most were for illegal consumption or something equally innocuous, and were dismissed.

Holding a coach responsible for the off field antics of 121 adolescents is a ludicrous standard, but that decision is best left to a public that recalls collegiate stupidity and would never have made Meyer the focus of the Hernandez story anyway.  Now, nosey journalists are going to focus their work on making the apparently self-righteous Meyer – even if the message of his text was reasonable, and it is – acknowledge that his players at Florida were treated differently than the rest of the student body.

Bishop spoke to a Gainesville police official who told him that Meyer visited the department to tell cops not to treat his players any differently, but the report also details some examples of players being given a pass when ordinary students likely would not have received the benefit of the doubt.

Allowing the media to go for “GOTCHA!” is not the result Meyer was looking for in sending the text, but it’s what he’s got.

When Former NFL player and coach Herm Edwards talks to incoming NFL players, he warns them about social media by saying, “Don’t press send!”  Meyer would have been wise to heed those words.  Sometimes people are smart enough to determine where blame doesn’t lie on their own, and don’t require a person hitting a hornets’ nest with a stick to convince them.

There is one other thing that is absolutely true – if you are an Ohio State football player, you are now on double-secret probation.  Whatever allowance for a youthful indiscretion you might have been due was exhausted by the appearance of that same treatment in Gainesville.

The current Buckeyes are either going to prove Meyer is an outstanding mentor by their exemplary behavior, or by being punished without mercy for any indiscretion.