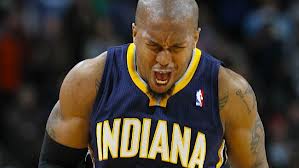 Pacers President Larry Bird is a man disinterested sharing platitudes.  What he says, he means, so when he told the media Wednesday about why David West was re-signed, he didn’t mince words.  “David has done more for this franchise than he can imagine.”

Talking to West, there is little question what Bird meant.  West appears to be just as unmoved to say things for the sake of saying them.  His demeanor when we spoke changed markedly when discussing his role as a mentor to the younger Pacer.

West understands that his most lasting imprint upon the team will be made in the attitudes of the youngsters for whom he sets an example.

The Pacers six years ago were guided by their id – the part of the psyche that demands that cravings are satisfied without thought of consequence.  West has imbued the Pacers with a conscience – a force that compels players to live up to the franchise’s expectations both on and off the court.

Players like that are absolute necessities for a team to be successful.  There must be a peer that demands buy-in to the team-first concept for it to flourish.

Great leaders walk the walk, talk the talk, and not only set an example, but require that others follow it.  That’s West.  What a gift for a young player like Lance Stephenson, and for a coach like Frank Vogel.  Leadership like West’s makes everything easier.

With apologies to Horace Greeley, and everyone else reading this because it’s trite and ridiculous, the Pacers motto for its youthful contributors should be “Go to West, young man!”