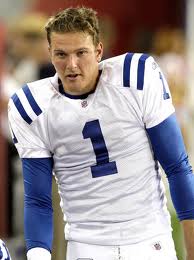 Pat McAfee may be the most media savvy punter in the history of the NFL.

“It’s all about content, dumbasses,” is what I shout on a daily basis to people in the media.  The delivery system is entirely beside the point.  Unique content is everything.

I’m sure there were and are people at the Indianapolis Star who are wondering what the hell a bunch of ink stained wretches are doing hosting a web video with Colts punter Pat McAfee.  I’ll tell them – they’re trying something different, and why the hell not do it.

Sure, Bob Kravitz, Mike Chappell, Mike Wells, and McAfee aren’t polished performers like Bob Costas and Joe Buck, but who gives a damn?  If they bring something unique and interesting to the sports conversation in Indianapolis, people will find it.

Big time media companies have spent so much time trying to figure out how to do what they do more efficiently that they’ve forgotten how to innovate.  There are a million reasons not to do something different, but there only needs to be one reason to override all of them – that it’s going to be fun.

I was so pleased to see the story this morning about this weekly live show each Tuesday night that will be webcast live indystar.com.  It’s been a long time since the Star has done anything  that resembles fun.

Whether this show drives the interest needed to sustain itself is meaningless.  The key is to keep trying things.  Try enough nutty things, and one of them is going to strike a nerve.  Screw concerns about failure, and try stuff – lots of stuff.

I worked for a very smart radio guy in St. Louis whose mantra was (and is) “Surprise and Delight.”  When was the last time anyone in Indianapolis media made the effort to surprise and delight their customers?  It might have been more than 40 years ago when David Letterman was doing weekend weather on WTHR-13.

The entire environment in mainstream media has evolved into job maintenance, so there is precious little in the way of risk, and there is nothing more compelling to consumers than risk.  That’s the primary reason that little websites become giant websites.  What the hell does a person with $3,000 invested in infrastructure have to lose?  Not a damn thing but dignity, and dignity doesn’t pay the mortgage anyway.

So they innovate.  There are no meetings with corporate fatcats who have nothing to gain and everything to lose through risk, so the hurdles between the status quo and getting something done are only in the creativity – or lack thereof – of the owner/operator.

That makes for the kind of nimble workplace where incredible, or incredibly stupid, things can happen.  Which of those the Pat McAfee Show will be is yet to be seen, but regardless of the outcome, good for the Star for stepping out a little bit and doing something different.

The Star is changing the game with some staff and form changes.  That sucks for the people to whom the change happened, but it shows the energy that prompts innovation.

It’s been a long time since the Star did something fun – probably back to the days “The Old Scout” showed an irreverence toward the powers that be in Indianapolis.

Good for the Star.  And good for McAfee – one of the smartest athletes Indianapolis has seen in decades.  Hope they keep trying things.