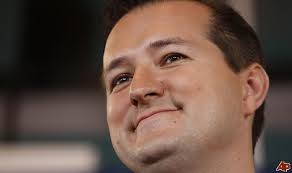 Smilin’ Tommy got his way with the aldermen, and isn’t that a surprise?

Picking winners in Chicago power struggle is always easy.  The guy with the deeper pockets will always triumph.

That was the case yesterday as Alderman Tom Tunney laid down his sword in the fight to preserve the Wrigley we all grew up with as well as the unobstructed views for the rooftops profiteers across Waveland and Sheffield Avenues.

Tunney of course publicly claimed victory, as defeated politicians always do, but the result would be the same if there were tire tracks on his back.

The Cubs finally figured out how to motivate the august governmental body of the Chicago Board of Alderman, and the Cubs will be free to spend $500 million of their own cash to turn Wrigley Field and the immediate area near it on Clark Street into an advertising filled carnival.

Less than 24 hours prior to the vote to approve the project, media reports showed Tunney claiming he had the votes needed to defeat the proposal.  Yesterday, he said, “Through months of negotiations and discussions, we now have arrived at the point where I have no objections to this project.”

Only in Chicago is an about face like this standard behavior, as was his claim that “our community has achieved many goals and victories through this process.”

There is some whining by opponents that the Cubs pitch was made by the husband of Mayor Rahm Emmanuel’s former chief of staff.  He’s also the co-owner of of VOA Associates, the firm trusted with the design of the project.  That’s called smart business.  Would they be happier if Bernard Epton’s great nephew spoke on the Cubs behalf?

Comedy came from Wrigleyville native Mike Merlo, who was quoted in the Chicago Sun-Times stating the obvious, “Wrigleyville is being turned into Rickettsville — and it’s happening because rich folks and the mayor want to have their own way.”

Yes, Mike, and there is no Santa Claus.  What the hell good is being rich if it doesn’t get you your own way, and why be the mayor if you can’t build the city in the way you see fit to?

With all the crying about Cubs owner Tom Ricketts trying to whore out Wrigley Field, there is one consideration that opponents tend to ignore – he owns the damn team, the bricks and mortar, and the land Wrigley Field is built on.  If he wants big breasted dancing girls atop the foul poles, that should be his call.

The only leverage fans have is to not buy tickets.

Ricketts isn’t some schlub that fell into a bunch of cash by being born into it – wait, that’s exactly what he is, but he’s a smart schlub, who knew how to get his way with the aldermen to unlock the historic provision that kept Wrigley a quaint museum that kept Cubs owners from realizing the kind of revenue potential that passionate Cubs fans could drive.

The upgrades include the horrific video boards that will be erected behind the left and right field bleachers, a 175-room hotel across Clark from the ballpark, a six-story office building, and other ‘improvements’ that will allow for 35,000 square feet of of advertising.

There will also be $300 million in improvements to Wrigley Field, and the entire bill will be covered by Ricketts.

The danger for Ricketts, of which I’m sure he is well aware, is that the nostalgia of attending a game at Wrigley Field will be ruined if the updates are so garish they fundamentally change the experience.  The Cubs are a terrible team with no chance to contend for the postseason at least through 2014, so the value of going for many fans is in remembering the experiences shared with fathers, grandfathers, son, and daughters.

Going to Wrigley Field is like visiting the very personal memorial for millions of Chicago families, and if the structure is changed so radically it alters that experience, Ricketts risks alienating ticket buyers in a very permanent way.

He’ll always be able to attract the morons willing to pay the highest cover charge in Chicago for the privilege of drinking the most expensive beer in town, so that demographic is solid if the Cubs lose all 162 games, and the seats are pointed away from the field, which might not be a bad idea anyway.

The only missteps by Ricketts in the process were the clumsy overtures to fans that promised a championship if the project was approved, and the threatened move to the suburbs if it wasn’t.  Both appeared desperate, and both gave fans a glimpse of who Ricketts and the Cubs believe they  are – easily duped rubes who’ll believe any threat no matter how unrealistic.

Ricketts got his way, which is what being a billionaire is all about.