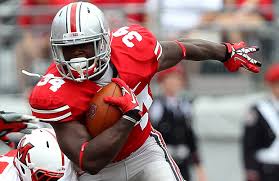 Carlos Hyde is no longer a Buckeye.

College athletes – particularly football players – need to understand two realities or risk losing their careers.  Nothing good happens after midnight, and this is not a good time to be arrested or accused.

Carlos Hyde would have been a senior running back for the Ohio State Buckeyes expected to contribute toward another possible undefeated season, but is now is a “person of interest” in an assault of a woman at Sugar Bar Two in Columbus, and has been dismissed from the team.

Florida linebacker Antonio Morrison was arrested for allegedly punching a bouncer at a club that refused to waive the cover for him, and then pinched a second time for barking at a police dog and resisting the efforts of a cop to handcuff him.

The incident Hyde is connected to occurred at approximately two in the morning, and Morrison’s was after three.

When I was in high school and college, my Dad always tried to enforce a midnight curfew.  When I would try to get him to extend it to one, he would always say, “Nothing good happens after midnight.”  He was right.  Every time I stayed out later, nutty things would happen – dangerous things, idiotic things.

ESPN’s Herm Edwards must have spent some time around my Dad.  Edwards’ two mantras have become, “Nothing good happens after Midnight” and “Don’t press send.”  Dad didn’t live long enough to see Facebook and Twitter, but I think he would have been an enormous troublemaker with tweets.

There is another problem – particularly at Ohio State.  Football coach Urban Meyer needs to distance himself from former player Aaron Hernandez, and that means running a very tight ship, at least when confronted with police reports.

Meyer has no choice but to respond to troubled players stepping out of line by bringing down a heavy hammer with great force – more than is likely necessary.

There used to be a time when kids were allowed to act like morons as a rite of passage.  Every college student breaks through societal boundaries at some point because they have never faced the consequences that provide those limits.

That time ended with Aaron Hernandez’s past being scrutinized as America demanded answers for the behavior he showed in allegedly shooting a friend in cold blood like he was a nephew of Tony Soprano.

With all hideous acts, the public looks for someone to blame, because without one we have to face the possibility for sociopathic rage to erupt from anyone at any time with the slightest provocation.  That kind of randomness is terrifying, and so we want logic to intercede.

How could Meyer not see the homicidal urges in Hernandez, they want to know.  Well, Meyer is not going to vouch for troubled kids anymore.  Second mistakes tend to stick to a coach, and a another kid being allowed to wander beyond societal edges toward murder would become a significant footnote in Meyer’s legacy.

As a great man once said to me, “I like you, but I love my family.”  Translation – “I’m not taking a bullet for your dumbass.”

Buckeyes should learn a lesson from Hyde.  Make responsible choices, and put your head on a pillow at midnight.  If you don’t, Meyer is not going to hesitate in sending you home.