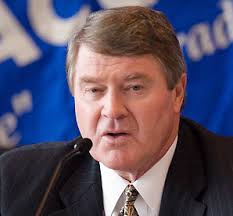 The dancing around doing what’s right, and consistent laying of blame elsewhere rather than leading the charge to a logical resolution of the inequities that fill the college football and men’s college basketball landscape has gone on long enough.

After listening to ACC Commission John Swofford today and SEC Commission Mike Slive last week, my expectations for Big Ten boss Jim Delany to say something meaningful could not be lower.

Not that he’s incapable of being a leader in actions as well as words – he’s one of the smartest guys in college athletics, and if you don’t believe me, just ask him – but conferences are doing everything they can to blame the NCAA for all societal wrongs.

Slive nauseated people who were actually listening to what he said by describing the letter he claims to have sent to the NCAA asking for leadership in the area of long term player health.  There apparently is a four-part plan Slive authored that would address concussions and their effects later in life to football players.  It was legal speak designed to deflect financial exposure.

Whether Slive has ever given any thought to the best football conference in America taking the reins of an effort to mandate the use of helmets that have proven more safe than the traditional shell and foam warheads that have remained mostly unchanged for over 30 years is unknown.  He sure sounded like a guy more interested in lawsuit avoidance than doing some good for the players last week

When race drivers like Scott Brayton and  Dale Earnhardt died after collisions with the wall, Indianapolis Motor Speedway CEO Tony George led the charge to develop the SAFR Barrier because it was the right thing to do.  There is no way to know how many lives George’s expensive work saved.

Conversely, Slive’s efforts so far, according to his speech last week, has consisted of drafting a letter that he hopes serves as sufficient motivation for them to act.  Pathetic.

Delany will likely address the payment of players above and beyond the traditional scholarship to cover, room, board, tuition, and books.  The call to reward football and men’s basketball players commensurate to their value is a hot topic right now, and the compensatory system needs to evolve within the governance structure of the NCAA and the five major conferences, or it will continue to evolve outside it.

Money finds value, and that has always been the case in major college athletics.  Whether it’s boosters giving a player a $300 hand shake, an agent handing an envelope to an athlete’s family member, or leased cars being given to athletes, the best players get cash.  It’s always happened, and it always will, but student-athletes should still be able to monetize their images.

It’s time that those in charge recognize that college football and men’s college basketball at the BCS level are fundamentally different than anything else going on at the collegiate level.

There is no logic to keeping all collegiate athletics under the same regulatory umbrella, and a correction to manage football and men’s basketball differently from schools in the A-10, Horizon, Summit, and Patriot Leagues – among others – is long overdue.

Swofford spoke of the NCAA separating the regulatory work for the “Five Families” from the rest of the colleges and universities it oversees, or the next step might be for the ACC, SEC. Big Ten, Big 12, and Pac 12 to withdraw as members of the NCAA to form their own organization that will be better able to manage issues like recruiting, player compensation, and eligibility.

It’s time for someone to stand up and say that with the massive TV deals, coach contracts, and sold out stadiums, the only meaningful difference between major college football and professional football is the lack of compensation for players.

Nature abhors a vacuum and value finds cash.  Those are two immutable laws of athletics and economics.  It’s time for the heads of the Five Families to acknowledge that.

[ed. note:  Big 12 Commissioner Bob Bowlsby said some similar things today, but his assertion that only a small percentage of football programs bend the rules is so far afield from reality that it negates the rest of his comments as the rantings of a lunatic.  If there is anyone who is of the opinion that a single program among the Five Families schools is not complicit on some level of NCAA violation, they are mentally incapable of processing facts.  That’s not to say programs themselves author the violations, but there is substantial evidence that kids or their families are getting cash from someone outside the program at many schools.]