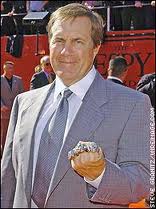 For people who value rings above all else, Bill Belichick is a hero.

Every fiber in his being and every thought in his head is about the New England Patriots winning.  His focus is absolute, and that is why everything Patriots Coach Bill Belichick tells the media today at 1:45p is irrelevant.

He drafted Aaron Hernandez for the same reason he drafts everyone – because Hernandez possessed the skill and will to help the Patriots win.  The moral compass that spun erratically enough for Hernandez to be arrested for murdering a friend in cold blood was immaterial.  He could play football better than anyone else on the board, so he became a productive member of the Patriots.

That plan appeared to work until the lifeless Odin Lloyd was found with bullets in his head.  Since then, the worst kept secret in sports, other than Ryan Braun’s PED use, became widely known – that Aaron Hernandez is a bad guy.

There are those who believe that Belichick’s only responsibility as coach of the Patriots is to win, and for those people he is a mentor, a symbol of the laser focus necessary to build a champion.

Others demand a dash of morality, caring, and understanding that a craving to win is not the only thing of value in their leaders.

Success is an interesting word because it has many connotations.  There are the championship banners that fly above the stadium, and provides joy to the fans who follow a team.  Those are a source of pride because they reflect the sacrifice of a unit toward a common goal that was rewarded with wins while others fell.

Then there is the legacy of the men who shape lives that become fuller, and leaders and parents who are themselves molded by the example of a great man.  That is a deeper and more profound level of success.  It doesn’t preclude winning, but those who understand the joy of watching players become better men understand that they are the true trophies of a life and career well spent.

Belichick has hung three banners through any means necessary.  Spygate comes to mind right alongside the draft of an accused sociopath as example of decisions that will define the Belichick legacy along with those three rings.  The Patriots cheated to gain an advantage in Super Bowl 36 against the St. Louis Rams by taping a practice prior to the game, and won the game as a result.

Some look at Spygate and applaud Belichick for doing everything necessary to win.  Others see a cheat who doesn’t understand that winning through duplicity, lying, and fraud shows an amorality that invalidates the accomplishment a championship represents.

It’s one thing to take a group of men, show them the path to a potential they never knew they possessed, and help them to overcome adversity presented by an opponent.  It’s a different thing entirely to employ any means necessary to achieve a result without the humanity that provides the context for true greatness.

Belichick’s championships are hollow because he lacks the basic goodness that makes a championship worthwhile.  His acquisition of truly bad men, emotional mistreatment of coaches to the point where they became ill, and win at all costs ambivalence toward rules that others respect make him a villain of 21st Century sports, not a hero.

People live and people die.  What we do for them, to them, and beside them, is what should define us as men and women – not whether we can gain fleeting validation through the result of a meaningless game.

Belichick is driven to win, and for those that view banners as the greatest feat a coach can achieve, that’s enough.

As a society, we should ask a little more than that from those we choose to respect.

2 thoughts on “Bill Belichick Speaks Today, But He Will Say Nothing – as Usual”