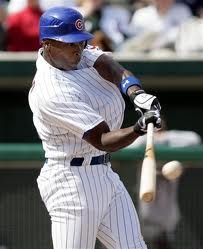 This was not a slider low and away because it appears Soriano is going to make contact.

The players former Cubs General Manager Jim Hendry signed are all gone, but the bills will keep coming for another 14 months as Alfonso Soriano has been dealt to the New York Yankees.

The Cubs will pick up $17.7 million of the $24.5 million he is owed, according to reports, and for that cash they get to not watch Soriano wave at low and away sliders, plus a reportedly mediocre prospect from the Yankees farm system.

Hendry seemed to be paid to execute bad contracts during the latter half of his tenure with the Cubs.  Free agents like Milton Bradley, Kosuke Fukudome, and Carlos Pena (in a bizarre deal that paid him $10 million over two years to play just one year), joined guys with bloated expansions like Aramis Ramirez and Carlos Zambrano to provide Chicagoans with a TJ Maxx team at Sak’s Fifth Avenue prices.

And they named a street after him in Park Ridge.  What’s next, Rickard Speck Way in Flossmoor?

What GMs throughout Major League Baseball should have learned from the Soriano (and all other long-term deals inked by Hendry) deal, combined with those of Alex Rocriguez and Albert Pujols is that with every additional year of a top dollar contract the chances of buyer’s remorse escalates to the point where after five, the team inevitably wants to end the relationship.

Pujols hasn’t been a bust yet, but his slugging percentage and OPS have dropped consistently since 2009, and he’s hitting .259 with 17 home runs at the age of 33, and while the final chapter of his great career has not been written, the $212 million the Angels have committed to Pujols through 2021 makes the Soriano deal look like a stroke of genius.

By the way, the Cardinals GM John Mozeliak said goodbye to Pujols rather than pay him crazy money for ten years, and the Cards have the best record in baseball.  That appears to be the way to run a franchise.

The Cubs current brain trust has signed extensions to young players through their 30th of 31st birthdays, but appear committed to not paying played giant chunks of cash as they enter their mid-30s, and that avoids the kind of stupidity that Hendry waved proudly.

Youth is coming to Chicago – as much a result of the old guys being shipped out, and it is because they acquired young talent.

The longest tenured Cub is Jeff Samardzija, who made his first appearance in 2008.  He is the only Cubs who was on the team the last time the Cubs qualified for the postseason.

The deconstruction of the Cubs is almost complete, and two pieces of the next disappointing puzzle (I would apologize for my pessimism, but I’ve seen enough of Castro to know any building in which he is a brick will crumble eventually) are in place.

Fans are counting the days until Baez, Albert Almora, Kris Bryant, and Jorge Soler make the jump to the bigs.  With Mike Olt and C.J. Edwards coming over in the Matt Garza deal, there are two more to hope for.  Interestingly, Garza was acquired for a kid named Chris Archer, who was the top prospect at the time of the deal.  The Tampa Rays have won the last six starts by the now 24-year-old Archer.

The Cubs are in a nether region the likes of which Cubs fans have not experienced since the 1950s, and that assumes that Castro is the next coming of Ernie Banks – a Hendryian leap of faith.