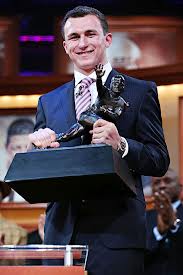 This will likely be the high point in the life of Johnny Manziel as he careens through life.

You want your kid to become a solid adult capable of making his or her own decisions.  All parents do, and it’s not too tough.  To borrow a phrase from 1070 the Fan and ESPN’s Dan Dakich, you “sack up” and make some unpopular decisions.

If the piece in ESPN the Magazine by Wright Thompson is an accurate portrayal, Johnny Manziel’s Dad is little more than an enabler for a troubled kid’s desires and behaviors – no matter how dangerous or addlepated.

The kid wanted a Mercedes, Daddy got it for him (no kid on the planet deserves a Mercedes).  The kid wants a beer or a Crown and Sprite, Daddy gets it for him.  The kid indulges his bad temper on the golf course – a temper that makes daddy sick to his stomach – Daddy forgives it without a word.

In a moment of all-time weak-ass fathering, Daddy expresses his frustration over reckless behavior to a sportswriter rather than dealing directly with Johnny.

In exchange, Daddy gets to bring boxes of crap for the 20 year-old to sign for family and friends.  When Johnny half-asses an autograph, Daddy traces over it.

When the family goes out to dinner, they sit in a private room so Johnny can drink unmolested.  Daddy doesn’t approve of Johnny’s drinking, so he quit.  Yep, the Dad quit.  That’ll show Johnny!

That’s the level of garbage parenting that has caused this kid to run off the rails as he swapped life as he knew it for a Heisman Trophy.

Manziel’s football coach at Texas A&M hasn’t been much better, according to media reports.  The kid gets arrested for having a fake ID after a bar fight, and the planned suspension never materializes.

If anyone watching this story smelled the presence of a consequence for Manziel as he continually acts like an idiot, please point to it for me.  Without the possibility of consequence, all is lost.  There is no reason to stay sane if crazy is allowed.  Indulging in crazy is a whole lot more fun that maintaining some level of societal sanity.

Everyone loves allowing their id to run the ship.  Whatever you enjoy, you do.  Woo-hoo!  That’s not the way life works – at least not the way it works best.

My son is a great kid – best I know.  There has never been a moment that I wasn’t thrilled to have him as my son.  When he was in high school, he would ask to go to a friend’s house.  I would ask him when he planned on being home.  He would tell me, and if he showed up a minute late, a disproportionately severe consequence was meted out because late is late.

I never told him what the consequence would be because when I was a kid, my Dad always told me what would happen if I screwed up.  That gave me the power to decide whether the bad act I was considering was worth the penalty.  It’s unnecessary to give a kid that knowledge.  The unknown is always more frightening.

There was never a curfew for Ryan other than those he set for himself.  I would have been happy for him to stay out until midnight, but he never gave himself a time later than 10:30p.  I sure wasn’t going to argue.

By the way, he was two minutes late one time.

I wasn’t some genius dad, but I knew all the tricks, and that gave me a leg up in making sure Ryan didn’t stray toward embracing his id.  (The id is the part of the brain that reflexives heaves great ideas “at the time” into your consciousness.  “Let’s do some shots!” is your id talking.  “Let’s drive all night to New Orleans for Mardi Gras!” is another.  Your superego tells your id to get back in its cage and shut the hell up – like a parent, which Johnny obviously lacks.  Who says I wasn’t listening during Introductory Psych at Indiana University?)

Manziel’s Dad shrinks from the superego-esque discipline that helps shape mature adults, and that’s why the kid is a total mess.  If kids are allowed to control their own lives, many would wind up making the same choices Manziel has.  That doesn’t make Manziel a bad kid; it makes him an untethered kid, and untethered kids screw up.

Someone needs to fill that void, but Daddy’s too busy being Johnny’s buddy to crack the whip, and at this point Manziel could tell him to go to hell with immunity.  Sumlin could step in, but the potential penalty for driving Manziel out of College Station might be a pink slip.

But you know what?  Any coach that would value his gig over doing what’s best for a kid is a sad pox upon the profession, and there are plenty of those who bend over backward to accommodate an immature but talented player.

It’s pathetic that no one is capable of putting the Manziel Express back on the rails, but that’s the state of big time athletics among the weak.

Someone with the ability to strip privileges from Manziel needs to step up and push that button, but it might be too late in the game to have that resonate.

If you’re a parent, what should you do?  When you say no, mean it.  Don’t threaten a specific punishment because that gives a kid the power to make an informed decision, which is bad for you.  If a rule is broken, bring down a consequence so massive the kid doesn’t forget.  More than anything, be a parent, not a friend.  You have enough friends, and so does your kid.

Manziel is the only example you need to show you the way not to parent, and if you haven’t read the Thompson piece, do so.  When in doubt, do the opposite of what Thompson reports Paul Manziel does.  You’ll be just fine.

One thought on “How Could Johnny “Football” Manziel Be Any Less Screwy Given His Dad’s Feeble Efforts?”