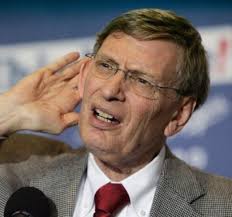 Just because Bud can’t hear, doesn’t mean he shouldn’t listen to fans who want this PED story to end.

Can Baseball Commissioner Bud Selig pour a cup of coffee without consulting an attorney?  Does he need Alan Dershowitz to call his cardiologist to negotiate an extra pack of sugar or dollop of creamer?

It’s time for Bud to sack up and lead, or get the hell out of the way.

Did ARod absolutely use PEDs?  Did he deal with BioGenesis?  Did he try to buy the evidence that damns him as a cheat.  Media reports answer those questions – yes, yes, and yes.  That fact is that we don’t know exactly what the hell happened, or continues to.  If the Yankees are trying to twist public opinion toward a resolution that absolves them from the need to pay an innocent ARod the $86 million he is owed from 2015-2018, the franchise should be dissolved.

Let’s assume that ARod is as guilty as everyone, minus ARod, seems to agree he is.

All negotiations lead to the middle, and that’s why PEDs have continued to be the game’s biggest problem for a decade.  The middle is where the Ryan Braun settlement ended.  Braun earned a contract with the Milwaukee Brewers worth over $120 million by playing chemically enhanced baseball, and was penalized $3 million for getting caught.

If that’s indicative of the level of punishment players can expect for a positive test, or evidence showing PED use, there will be lines of ballplayers that wind around the block as they wait for their HGH or whatever new untraceable strength building dope comes next.

Baseball needs to bring down a hammer with real consequences to stop the cheating that has been the story du jour in the national pastime for the past decade.  A lifetime ban would get the attention of the cheats.  So would the automatic invalidation of a player’s contract upon a positive finding for PED use, but let’s confine this chat to ARod and the lifetime ban he is due.

Baseball insiders continue to extoll the virtues of Selig’s reign as commissioner, and I have no idea why.  Attendance is down.  Interest is down.  The same solution to the game’s biggest problem is proffered by Selig with the exact same lack of effect, and the eyes of fans turn away.

Where have you gone, Peter Ueberroth, a nation turns its lonely eyes to you – woo, woo, woo.

Doing the right thing has taken a back seat to doing the non-actionable thing.  All terminations, punishments, suspensions, divorces, and disputes are negotiated through attorneys, and so it is with the ARod mess.

The clean players are left to wonder why they have made the decision to not use PEDs as the consequence never outweighs the benefits of the crime.

That is Selig’s legacy – endless discussions with batteries of attorneys to find the middle ground that results in a lack of change to the flawed status quo.  How long has the PED issue dominated discussion about baseball?  And how many times has Selig told fans that the steroid era is over?

Sure, steroids are gone, but they have been replaced by other more insidious PEDs that corrupt the ability of clean players to excel.

It’s time for the commissioner of baseball to do the right thing.  That’s his job.  Then let the lawyers sort out the fallout.  That’s their job.

ARod should be banned because he has no business playing baseball against clean players ever again.  It’s an insult to the majority who prepare to play the right way to share the field with an unapologetic sociopath.  His presence on the field is an insult to the game itself.