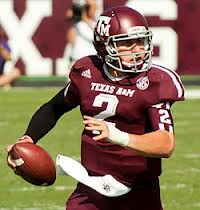 If the NCAA finds that Johnny Manziel took cash for signing autographs, his days as an Aggie will be over.

Escape comes in many forms.  Former quarterback phenom Todd Marinovich told us yesterday that he sought relief from fame through drugs.  It appears Johnny Manziel has found another means of crippling his own collegiate career.

The reason it’s always best for athletes to stay quiet is to keep from being a target of an outstanding  show like ESPN’s “Outside the Lines”, who are reporting that Johnny Football is being investigated by the NCAA for reportedly accepting a five-figure payment from signing a bunch of memorabilia in south Florida the day of the BCS National Championship game.

That Manziel should be able to profit as he likes for signing his name is a separate issue for another day, but the morality of taking cash for autographs is impossible to question regardless of NCAA rules.

If it can be proven that Manziel took money, his days as a quarterback for Texas A&M will be over, and it’s likely that he will breathe a deep sigh of relief.

A kid with everything who wants none of it is a great anti-hero for writers who are always digging to find the outlier among those who struggle for the same reward, and Manziel is definitely that.

Manziel is a spoiled kid who chooses not to live his life within the limits imposed upon him by his coach, parents, or the NCAA – to the extent any of them have tried.  At some point, people who make all their own decisions wind up being taxed by society in some way.

I have always driven a car in what I have determined is a very safe manner for me.  That hasn’t always been in keeping with the rules of the road, which I believe to be flawed in some way.  The occasional ticket was a reasonable penalty, until I was informed by a traffic court judge that in Indiana, the accumulation of 10 moving violations in 10 years results in an automatic five-year suspension of driving privileges.  Holding seven violations in the last eight years has given me adequate reason for an adjustment of my driving.

Unless the consequence of an action outweighs the gain available, there is no reason to change behavior, and the consequence for Manziel getting paid to sign pics, helmets, etc… (if the investigation finds that he did the deed) is the end of something Manziel reportedly can’t wait to stop doing anyway.

There seemed no question from afar that Manziel would find a way out of what he perceives to be a living hell, and I’m glad he found a way to get that done without doing himself any physical harm.

Making some bank for signing autographs is the least invasive means of escape that I can remember, and now he has some gas money for that Mercedes.