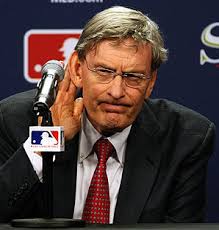 Bud Selig doesn’t like to hear criticism from the media, and for some reason the media complies.

National media folks who line up to kiss Baseball Commissioner Bud Selig’s ring for his work to solve the PED problem in baseball are nauseatingly wrong.

The steroid age never went anywhere.  Players still juice, just with different stuff than before.  The consequences for doping still fail to deter those who feel a small edge will nudge them into another salary strata.

Baseball and Selig flexed their muscles in suspending Milwaukee Brewers outfielder and 2011 National League MVP Ryan Braun of the remainder of this season.  He will forfeit just over $3 million is salary, but is guaranteed another $117 million through the end of his contract in 2021 (includes the $4M buyout rather than the $20M mutual option for 2021).

That contract extension was earned through the use of PEDs, and it’s anyone’s guess what kind of numbers Braun will be able to reach once cleaned of the chemicals that caused the suspension.  His numbers prior to the suspension were not very Braun-y – with nine home runs, 38 RBIs, four steals, and an OPS of .869 through 67 games.  In 2012, Braun tallied 41 homers, 112 RBIs, 30 steals, and an OPS of .987.

Braun was still a good player this year, but worth far less than the elite money he is scheduled to earn for the next eight seasons.

Nike ended their deal with Braun as a result of the suspension, but the loss of that cash will not come close to the salary Braun will re-engage next season.

Yankees third baseman Alex Rodriguez is expected to be suspended later today through the end of 2014, but he has already made more than a quarter of a billion dollars, and is due another $61 million from 2015-2017.  That’s his reward for excelling while reportedly doping.  The penalty will be in the range of $30-$35 million.

You don’t have to be a Wharton graduate to see that dumping $3 million to make $117 million or a $35 million haircut to make roughly $320 million is a pretty damn good financial strategy.  If I could stick a needle in my ass to write like Ernest Hemingway – and get paid like it – stick me, baby!  That I my publisher might drop me after my ninth book would be a perfectly acceptable consequence.

Selig has never brought to bear a penalty for a player who dopes that was sufficient to serve as a deterrent for others, and until he does, his leadership in this area will be a failure.

The media’s belief that Selig has been a force for good in preventing PED use defies logic.

The list of those willing to bear minor punishment for major rewards continues to grow, and there is no reason to believe that will end because of the suspensions expected to be announced today.

Until there is a lifetime ban installed for PED use, or at the minimum the voiding of a contract at the club’s discretion for a player who cheats, players will continue to find chemical means to improve performance.

Selig’s legacy in the area of dealing with PED use/abuse in baseball will be deservingly weak, and those who view it differently are seeing him through Bud-colored glasses.