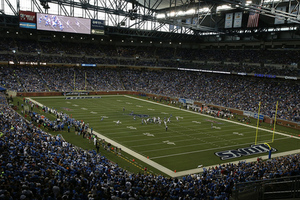 Can you tell me who has the ball in this photo? Now tell me who made the tackle during this game at Ford Field between the Rams and Lions.

Yes, Don Fischer and Bob Lamey misidentified some players yesterday during their respective broadcasts, and that kind of thing used to drive me a little crazy.  Watching on TV, I could always see what was going on, and never understood how I could see what they couldn’t.

Then I spent two seasons as the spotter for St. Louis Rams road game radio broadcasts.  I traveled with the team, and would rather stay busy than just lounge around in the press box, so I sat next to play-by-play voice Steve Savard and pointed to his chart as I recognized who caught passes or made tackles.

It sounds easy.  It sounds really easy.  I’ve watched a lot of football over the years, and certainly understand the game well enough to point to the names of the guys making plays.  That’s what I thought.

What I didn’t know is that the visiting radio booth is often perched in the place farthest from the field, and if it’s in the corner of the stadium, we might be 100 yards from the play and 150 feet up.

The first game I did was in Kansas City, and the booth is at the highest point in Arrowhead Stadium.  Preseason games feature expanded rosters and constantly churning shifts at all positions, and the Chiefs numbers are almost indistinguishable from one another.  The linebackers wearing 55, 58, 56, and 53 making tackles moving toward us were impossible to tell apart, especially making tackles on running plays.

I tried with the naked eye, binoculars, and back to naked eye.  My shrugs to Steve outnumbered the plays where I confidently pointed to the correct name on Steve’s chart.

Keeping track of the number of consecutive plays where I was able to identify the tackler seemed like a fun diversion.  It was until I finished the game with a high water mark of three.

I was fortunate that Steve is a pro’s pro, and that technically I was in charge of the product.  Firing myself was out of the question, and Steve was unlikely to hit me, so I got through that game without a consequence more unpleasant than guilt over not helping.  There was another result of that game – a total and complete empathy for the people calling games, and their occasional slips in getting the ball carrier or tackler wrong.

The most important thing I learned was that there is nothing wrong with not saying anything until you are sure.  Trying to be lightning fast at the expense of the being 100% accurate will bite you in the ass a surprising proportion of the time.

I became relatively competent at recognizing what Steve wanted from me, and as I accepted that a spotter can hurt with a mistake a hell of a lot more than he can help by being accurate, I became less a hinderance to the product.

Being a spotter is a lot like being a football player in that way.  If I could go 50-for-50 in identifying the tackler, that was a much better day than going 62-for-64.  Better to not point at all after 20 plays than to point incorrectly once.  Being wrong was a turnover, and we don’t like turnovers.

The network guys have a coterie of producers, spotters, and other assorted helpers to keep them on the beam.  The local TV guys during the preseason, and the radio guys do their best with a skeleton crew.

So the next time you watch a Colts preseason game called by Don Fischer or listen to any game called by Bob Lamey, cut those guys some slack.  It’s a hell of a lot harder to accurately call plays as they happen than it appears from your couch.